Gold and sovereign coins were intentionally excluded from this list since they will have their own top 10. Here's the top 10 most rare and valuable pre-decimal australian circulating coins sorted by denomination and date: 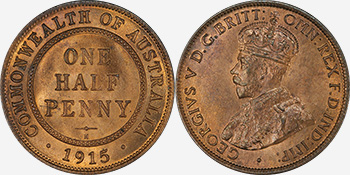 Minted at only 720,000 examples, the H mint mark is visible under the lower scroll on reverse to indicate that the coin was produced at the Heaton mint in London.

Half penny 1915 price guide and values

Approximately 10 examples of the 1916 half penny mule are known to exist and all are in circulated condition. While the Calcutta Mint was striking the Indian quarter annas and the Australia half penny 1916, obverse dies from both coins were paired creating the mule. The best certified example known is a PCGS EF Genuine - Damaged. Read more ».

Half penny 1916 price guide and values

Most of the half-penny coins produced in 1923 in Sydney bore the date 1922. Only 3 pairs of dies were used at the Melbourne Mint to produce 480,000 1923 dated half-penny coins. But because of the dies didn't last long, the mintage of this coin is estimated at 15,000 examples, but a lot less than that are known today, especially in Mint State condition. 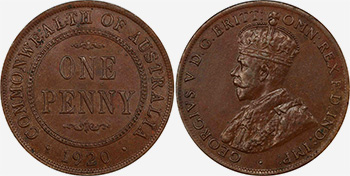 Several varieties of the 1920 penny exist mostly regarding the position of the dot(s) on reverse and the Indian or English obverses.

The best certified example known is a PCGS MS-66 Red and Brown - Dot Above Bottom Scroll - Indian Obverse - which sold for nearly $AUD41,000 at auction in September 2014.

The most famous of all the Australian Commonwealth circulating coins, the 1930 pre-decimal penny, was minted at around 3,000 examples. At the end of the 1930, the Mint made the dies for a 1930 penny for specimens and proofs striking. But these dies were also used in 1931, intentionally or not, to produce a low amount of circulating coins. The English Obverse variety is less common than the English one.

This coin is the rarest silver pre-decimal circulating coin. The best certified example known, among the 30 examples between NGC and PCGS, is in AU-58 condition. A 1922 overdate threepence example described as aUNC sold at International Auction Galleries on September 5, 2010 for AUD$130,000. Another one sold as aEF/gEF in March 2009 for AUD$108,345. 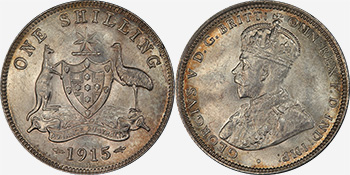 The silver 1914 H florin was struck at the Heaton Mint at 500,000 copies. Like the 1915 florin, this silver coin is very scarce in Mint State condition. 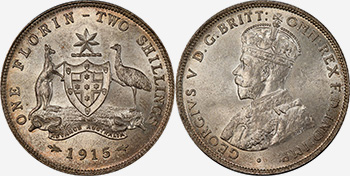 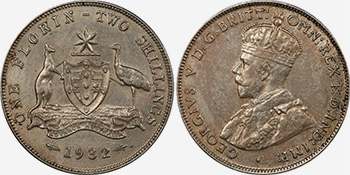 Very scarce in Mint State: only about 20 certified PCGS and NGC coins exist in uncirculated condition.

For all values, visist the Australian coins price guide or visit the auctions prices realized of certified coins.