The following content comes from the Jon Saxton personnal website last updated in 2004, which not longer exist since around 2018. To keep this information available to the public and for a perpetuity reason, we reproduced it here.

Only four overdates have been reported on Australian Commonwealth coins:

The first of these is extremely rare but possibly all of the 1925 shillings are overdates.

Certainly these coins are not overstrikes. An overstrike is when a fully-minted coin is struck a second time with different dies. This never happened in the history of Australian Commonwealth coinage but the holey dollar was an overstrike, at least a partial one.

In the context of mint practices in the early part of the twentieth century there were four distinct methods whereby a coin may have been struck bearing the impression of an earlier date:

Re-dating of an existing derivative master die or punch

There were two common methods for producing dies for a given date. From 1910 until the early twenties the usual practice was to use partially-dated working punches to press working dies onto which the remaining date numerals were added by hand. As the need for coins grew and annual mintages increased, this became tiresome and it was more expedient to produce a fully-dated derivative master die and make fully-dated working punches from that. We can see the effects of this change from the disappearance of variations in the position of date numerals after about 1922.

Suppose, for example, that in late 1921 the Melbourne Mint staff decided to produce a reverse die for a 1922 threepence. At that time the master tools were all held at the Royal Mint at Tower Hill in London but the Melbourne branch had a hobbing press which was used to produce working dies for the minting of sovereigns and half-sovereigns so it certainly had the means to accomplish the task. The steps would have been something like this:

Now suppose further that the grinding in the second step was less than perfect, leaving traces of the final 1 on the punch. That would have been passed on through the remaining two stages and would have produced a die with traces of the original date under the new one.

Remember that this sequence is only presented as an example. The 1922/1 threepence was not actually produced that way. However, very similar practices were employed at the Melbourne Mint for forward-dating tools supplied from London.

Use of different punches in the preparation of a die

Until quite recently, the preparation of a die or punch required multiple "blows" in the hobbing press. Penny and florin tools, for example, typically required three blows, halfpenny and shilling tools required two. I am not sure how many were needed for sixpences and threepences but it was probably two blows.

The procedure for making a die is quite laborious. Die steel arrives in annealed form. A piece is cut to the required length and shaped in a lathe. The face which will become the die is turned to a point. (In the nineteen-twenties Melbourne Mint was shaping die blanks with angles varying from 60° to 160° with 140° being the most common.)

The soft unformed die is placed upright in a hobbing press and the punch is squeezed onto the surface using high pressure, forming a partial impression, insufficient for striking coins. Meanwhile the die has become "work-hardened" and so resistant to further pressing. (Detail which follows is subject to verification; I can't find the reference right now and I am working from memory ...) The die is removed from the press and put face-down into a tray along with other dies in preparation, and is placed in an annealing furnace where it is heated to the appropriate temperature for a while and then allowed to cool. The die is placed back in the hobbing press and the punch is lowered slowly and carefully so that the designs are accurately aligned; then the die is pressed a second time. If a third blow is required then the process is repeated, otherwise the die is machined to its final shape and then hardened by heating and quenching. 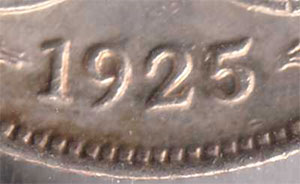 Research by Paul Holland suggests that the 1933/2 penny was produced by pressing six partly-formed 1932 working dies with a 1933 punch and my own research into the shillings of the nineteen-twenties suggests that a rather similar sequence of events generated the 1925/3 shilling as an overdated master die.

The projection from the top left of the 5 appears to be the residue of a 3. The 1925 master die was probably pressed from a 1923 hub (ex London) and a 192_ hub prepared in Melbourne. The 5 was then hand-punched onto the master die.

Directly overpunching a numeral onto a working die

Given that die preparation was such a laborious (and expensive) process, mints frequently tried to maximise their investment in dies. This was particularly true in the days before the reduction machine and hobbing press had made the preparation of dies and punches a routine matter. In those early days, dies were frequently engraved individually by hand. If a prepared die for a given year had not been used then one technique for putting the die into service for a later year was to hand-punch a new digit. This technique had been used at Melbourne in 1872 to deploy some leftover 1871 sovereign dies illustrated below.

An example of an earlier overdate executed by the Melbourne Mint, altering a sovereign die dated 1871 to 1872. This was almost certainly done by hand-punching the 2 directly onto a working die. 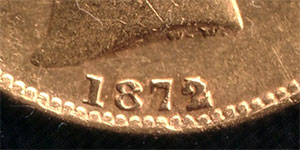 Overdating was not confined to coins with an English ancestry. This is a hand-punched overdate 1791/81 on a silver guilder from the Netherlands province of West Frisia. 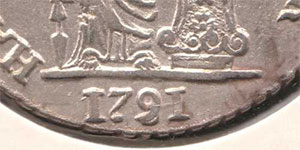 A characteristic of overdates produced in this fashion is the very strong underdate. The only weakening of the original digit occurs because metal is pressed into it from the action of the overdating punch and in the case of the 1922/1 threepence, the sheer strength of the 1 underdate suggests that the die may have been produced by punching a 2 directly onto a 1921 working die, perhaps as an experiment.

Estimates of the number of 1922/1 threepence in existence vary from 200 to 900 depending on which catalogue you read. Even at the upper estimate the coin is very rare. In contrast, the other overdates are much more common. There is some dispute about the authenticity of the 1922/1 threepence overdate.

It is not obvious to me how the 1934/3 threepence overdate was produced and I have not researched that coin at all yet so any conjecture on my part would be premature. 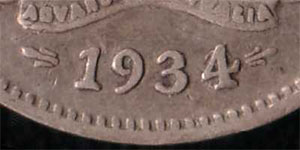