You are: Home » Australian coins » Articles » Top 10 most known and desirable australian modern errors and varieties

Top 10 most known and desirable australian modern errors and varieties 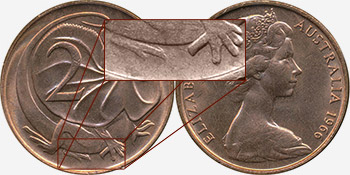 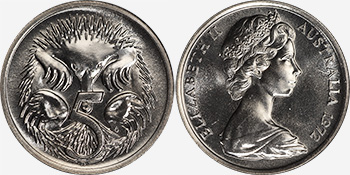 Only 8.25 million 5 cents coins in 1972 (compared to 306.5 million in 2006). A smaller design of the Echidna on the reverse exists, also called Low Echidna. PCGS certified 524 High Echidna variety and 59 Low Echidna, which makes the second one rarer.

Both varieties have a premium price compared to most of the other 5 cents dates. 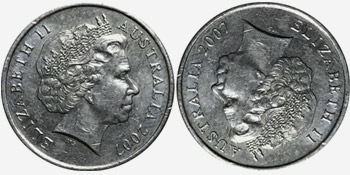 This kind of error happens when two obverse dies are used to strike a coin. A lot of fakes exist of this kind of error, often created for magicians or sold in curiosity shops.

When the London Mint began to strike Australian coins for the new decimal system, a small number of twenty cents coins were struck with a reverse die containing a wavy baseline on the 2 of 20 cents. This is probably the most well-known decimal coin variety.

In 1981, a rarer variety exists showing only 3½ claws on the platypus.

Fairly common, this variety is a highly collectible coin even if it isn't worth much. It can be distinguished by looking at the back of the emu's head, second-largest living bird by height.

The value of this variety is generally the double of the original version.

This coin Celebrating the United Nations International Year of the Family was struck with two different obverse dates: narrow and wide. The spaces between the digits is the easiest way to recognize each variety.

This coin isn't worth much either, but both varieties have their spots in any decimal collection.

In 2006, Drew Jackson, collector, found out that 2 varieties (raised and incuse flag) exist for the reverse of the 2000 50-cents commemorative millennium coin. The Royal Australian Mint estimated that 200,000 of this variety were struck for circulation from a single die.

Even if many examples are known, a high Mint State condition Incuse flag 50-cents coin is worth above $2,000.

In the Renniks Australian Pre-Decimal & Decimal coin errors book, released in 2015, only 8 examples of this coin were known.

It is currently easy to get one on Ebay for around $50 to $100. Even if it isn't worth thousands, this coin is one of the most known modern error on australian coins. 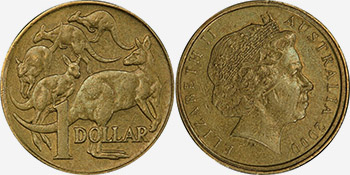 Struck with 10 cents obverse die causing a double obverse rim. An employee, anonymously, said that the Royal Australian Mint wanted to destroy all mules when the mistake was found during the production process. Even if 462 PCGS and 13 NGC are certified, none are MS-65 or better. Current estimate of circulating one dollar 2000 Mule is 6,000 copies.