By the mid-1850's the Government decided that it was about time that an official mint should be set up to convert the plentiful gold stocks into coins of the realm. Adelaide and Melbourne both petitioned for the honour of establishing a mint, but the royal decree went to Sydney.

Legislation for the establishment of a branch of the London Royal Mint in Sydney was announced in August, 1853. Ironically, the new mint was to be housed in part of the old Rum Hospital which itself owes its existence to 'currency' of another kind. The mint opened on 14th May, 1855 and the first coins were struck on 23rd June, 1855. When opening Parliament on 5th June, the Governor General advised that the building of the Mint was complete, the machinery erected, and the process of coinage commenced. It was anticipated that charge for assaying and coining would fully cover the cost of running the facility.

The first Sydney Mint sovereigns were unique in the history of the British Empire. In a situation which has not been repeated since, the coins carried a design which was completely different from that of the standard British issue. Even so, the dies for both the sovereign and half sovereign were slapped together in a half-hearted way by the authorities in London.

The reverse, which featured the words 'Sydney Mint' and 'Australia', was a design adapted from the sixpenny and shilling English coins circulating at the time. The obverse, by James Wyon, showed a thirty-six-year-old Queen Victoria who was featured uncrowned with ribbon in her tied-up hair. This obverse design appears only on coins minted in 1855 and 1856 and these are now very scarce, especially in better condition.

In 1857, with less than a total mintage of 2 million coins, a new obverse of Queen Victoria was featured. Leonard Wyon attempted to give the new portrait a more Australian flavour with the new hair-do featuring a spray of banksia. The first Sydney Mint coins were only intended to circulate in New South Wales. This was later amended by the British Treasury to include the other 'Colonies of Australasia' but not the United Kingdom.

The other colonies were less than enthusiastic. Doubts arose about the intrinsic value of the sovereign. Some claimed it was worth only 19s 10d. Some Victorian merchants discounted it to 19s. However, an assay from the Royal Mint in London quelled the rumours, in fact creating a rush for the coins. In January, 1856, the mint disclosed that the fineness of the Australian coin exceeded that of its British counterpart.

In the report of the master of the Royal Mint dated 3rd March, 1856, he states 'Several pieces from the Governor General have reached me, of which the assay offered nothing remarkable ... You could not have hit the standard more closely than in the Sovereigns and Half Sovereigns lately received, which the average is exact, the divergence of individual pieces is extremely moderate, and shows great regularity of work.'

The Australian coin somehow always seemed to look paler than the British coin and now the reason for this was clear. The Australian ore had a high percentage of silver while the darker tone of the British coin was due to the copper content. Soon they were being accepted with great relish in all the business houses around Australia. From 1868, they were even accepted as legal tender in Canada and Newfoundland. Britain had been accepting the coins since 1863.

Many of these early Sydney Mint sovereigns left Australia in traders purses and disappeared overseas. Bullion dealers disposed of others by melting them down for their intrinsic value. Those which remained were generally worn flat by a sovereign-starved community.

Although mintage figures seem high in some years, these coins are scarce especially in better grade. This situation was made worse by the short run of Sydney Mint gold coins. Production of the half sovereigns halted in 1866 and the British Treasury revoked its approval to mint any further Sydney Mint coins in 1871. The last Sydney Mint sovereign is dated 1870. 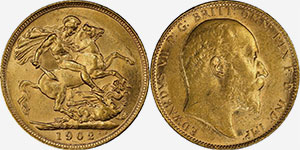 The British Treasury was growing increasingly jealous of its gold sovereigns and half sovereigns. There were now two reverse designs for the sovereign. One was the famous Benedetto Pistrucci St. George design, first issued in 1817 on English sovereigns; the other was the shield reverse which was beautifully created by Jean Baptiste Merlen. The shield featured the quartered royal arms of England, Scotland and Ireland. St. George first appeared on a 1526 George Noble of Henry VIII. It paid homage to the third century Greek soldier who was martyred in A.D. 303. St. George was adopted as the patron saint of England around the eleventh century.

It is somehow fitting that the St. George design should appear on Australian coins as it was Sir Joseph Banks who helped to resurrect the image of St. George slaying the mythical dragon. Three years before the first St. George sovereign appeared, Britain had slain its own foe on the battlefields of Waterloo. Banks suggested to King George III that such a design would be a fitting tribute to Britain's mighty victory. It is said that Pistrucci used an impoverished table waiter as his model for the athletic St. George.

In 1871 the first of the new sovereigns appeared from the presses at the Sydney Mint. Both the Shield and St. George reverse designs were struck for the sovereign, while only the Shield reverse for the half sovereign was employed until 1893. A small 'S' mintmark was used to distinguish the Sydney mint product from its British sister. On the St. George design the mintmark can be seen just below the head of the queen on the obverse side. On the shield reverse, the small mintmark can be seen just below the shield.

Sydney's production was supplemented from 1872 when another branch of the Royal Mint was opened in Melbourne. The new Melbourne Mint was plagued with problems. Faulty machinery in the opening weeks damaged at least 95% of the coins struck. In that first year, no half sovereigns appeared and only about one-third of the Sydney production of sovereigns appeared. Eventually, these problems were solved and the Melbourne Mint went on to produce coins long after the Sydney Mint went broke making money.

The Melbourne Mint also produced both reverses of the sovereign and the mintmark "M" can be found in the same location as the Sydney coins' mintmark. From 1874 to 1899 a total of nearly £67 million worth of gold coins were struck by the Sydney and Melbourne Mints. This was twice as much as the Royal Mint in London struck in the same production period.

In 1887 there was another design change and new locations for the mintmarks. This was the last year that the shield reverse sovereign was struck.

During the years in which the St. George reverse sovereign was struck alongside the shield reverse, neither mint bothered to keep separate records of production. The mintages shown for these coins is duplicated as there is no way of telling just how many of each were produced in a particular year. It is evident that the St. George reverse was more favoured and that the shield reverse is by far the scarcer of the two designs.

New arrangements saw the 1887 St. George design modified during the year and being used exclusively on sovereign issues by both mints. The shield reverse only was used for the half sovereign. A new portrait, designed to celebrate Victoria's golden jubilee in 1887, was severely criticised. The likeness gave Victoria a hard, scowling appearance and she looked almost comical with the tiny crown perched on her head. The crown looked as if it would topple off at any moment.

Such brickbats were of little concern to its Austrian designer, Joseph Edgar Boehm, who was knighted for his efforts in 1889. His initials appear on only some of the Sydney Mint half sovereign issues in 1891 (under the obverse bust) and constitute a catalogued variety. A small number of gold 1887 two and five pounds were struck for V.I.P's. These are extremely rare today. They were struck at the Sydney mint and should not be confused with their English counterparts which were struck in larger numbers. The mintmark can be found on the reverse just above the date.

As the advancing years crept up on Queen Victoria, it was time that her portrait was updated. The resulting design by Thomas (later Sir Thomas) Brock was to become known as the Old Head design although it is probably kinder to Victoria's memory to call it the Veiled Head type. This design was struck continuously until Victoria's death in 1901 after a reign of sixty-three years.

Production was stepped up after 1899 when another mint was set up in Perth. The mintmark 'P' on all subsequent sovereigns and half sovereigns can be found in the same place designated for the Sydney and Melbourne mintmarks. Any sovereign without a mintmark will be a British issue. From 1894, the shield reverse half sovereign was dropped in favour of the St. George design.

Edward VII's short reign saw an abundance of gold sovereigns and half sovereigns from all three mints. The bald-headed likeness was the work of George William de Saules, who also designed the obverse of the first Australian coins of 1910. The issue of sovereigns and half sovereigns began in 1902 and in that year alone gold coins worth over £11 million were produced by the combined efforts of the three mints. Again a small number of 1902 two and five pound issues were struck for a select few at the Sydney Mint.

The designer of the George V Australian silver and bronze issues, Sir Edgar Bertram Mackennal, was selected to produce the obverse design for the George V sovereign and half sovereign coins. Like de Saules, Mackennal preferred a bare-headed design of the monarch for the gold series, while both men went for the more majestic crown and robes for the silver and bronze issues. A slightly reduced size king's head was used on the gold sovereigns produced between 1929 and 1931.

Some dramatic changes occurred during the reign of George V which would eventually see the demise of the Australian gold series. Gold became a less integral part of the Australian financial system after 1915. The huge mountain of gold which had helped to found the colony began to dry up in the 1920's. Soon Australia needed to import gold to feed its coining presses.

In 1926, the Sydney Mint closed. Hard as it is to comprehend, the mint actually went broke making coins. Perth and Melbourne continued until 1931 when the last sovereigns were struck. Officially half sovereigns were last struck in 1920, but the rare 1918 issue is the last date known. This is also true of the last years of the sovereign. It is thought that, although minted, many of these coins were not released and were later melted down.

Today, most collectors are content to accumulate a type set of sovereigns and half sovereigns due to the enormous cost involved in collecting a date set. Over the years, the Australian gold series has proven to be an excellent investment area. Many investors feel secure that sovereigns have value in more ways than one. There is their intrinsic value, and more importantly, that special quality about a coin which gives feeling to the word 'numismatics'.