Because of the rising price of gold (127s 4d per ounce) after World War I, the Royal Mint suspended the production of the sovereign. The mint branch in Sydney, Australia already started to produce some of them. 360,000 is the official minting of the 1920 Sydney Gold Sovereign, but only four circulating examples are known, one of them is part of the Royal Australian Mint Collection in Canberra. 1 specimen is also known.

This coin is one of the rarest Gold Sovereign produced of all British Empire: Britain, Australia (Melbourne, Sydney, Perth), India (then Bombay, now Mumbai), Canada (Ottawa) and South Africa (Pretoria).

According to Barrie Winsor, who has interviewed some of the Jacob Garrard descendants:

In our sale of the George Collection in 2014 we produced evidence that [...] an order for sovereigns dated 1920 which was placed early in 1920 with the Sydney Mint by Jacob Garrard, in order to present them to his seven children when he and his wife, Rebecca, celebrated their golden wedding anniversary on 15 April. From this we deduced that there could be a maximum of only 9 Sydney mint sovereigns dated 1920 in existence.

It is still unknown exactly how many 1920 Sydney Gold Sovereign were minted and if every kids received one of them.

Jacob Garrard was a New South Wales politician and a trade unionist. In 1880, he was elected to the NSW Parliament as the local member for Balmain. In 1885, he was responsible for having Labour Day public holiday officially declared. In 1895, he became the first Minister for Labor and Industry in NSW, however, narrowly lost his seat in NSW Parliament in 1898, he remained active in public and community life for several years after that.

We can only presume that Mr Garrard held some considerable sway in at least some circles in Sydney in 1920, from the circumstances of his special order. 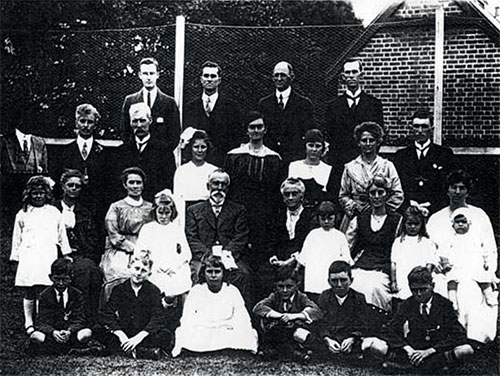 St George slaying the dragon was the chosen subject for the gold sovereign that made its debut in the late summer of 1817. Destined to become one of the world's best-loved coin designs, it was created by the Italian gem engraver Benedetto Pistrucci who had come to London in 1815 and whose subsequent association with the Royal Mint brought about something of a golden era in numismatic art.

Founded on a style inspired by classical Greece, Pistrucci's approach to the design represented a refreshing departure from previous gold coins whose style had been traditionally heraldic. It seems he may have found inspiration in the magnificent Elgin Marbles, the beautiful marble carvings that Thomas Bruce, the 7th Earl of Elgin, brought to England in the early 1800s.

The History of the Gold Sovereign

The circulation issues were minted with dies with residue left on them after they were shipped by sea from England to Australia. On the specimen example, residue was removed to produce it.

This is the only known specimen known, probably struck in 1926. It was certified SP-66 by PCGS in Paris in the 2010s.

This coin was discovered by the public in 2018.

Bentley Collection, A.H. Baldwin and Sons' Auction, lot 736. It was called the rarest of all issues of the sovereign series, rarer even than the famed 1819 sovereign struck at London, of which some 10-12 examples exist. The Bentley sale cataloguer suggested that this coin's great rarity did not arise from any melting of the reported mintage at Sydney for the year but instead that no pieces were struck during 1920 bearing the date and S mint mark except those minted because of some special event in the year.

That was the limit for the coin, no more, said expert Robert Jaggard, who made the record-breaking bid by phone from Sydney on behalf of a private Australian collector. But the sale almost didn't happen. Mr Jaggard's phone line dropped out just as bidding between the three interested parties peaked. I was nervous I was going to miss out on it, he told AAP. My client didn't know what happened. I just rang him to tell him we got the coin. That's all he knows. He doesn't know the drama that happened. The anonymous winning bidder has completed his collection of Australian sovereigns with this purchase. Mr Jaggard said he was lucky to have been involved in all three sales. It's very rare, it's one of the rarest gold coins in the world. There are only three in private hands and there's only a couple more in museums, which will never come out anyway.

Sold by St James' Auctions during The George Collection auction. It was desribed as: A marvellous sovereign, essentially FDC, lustrous and obviously specially struck with an unusual degree of sharpness on King George's portrait, while on the reverse some detail is lacking on St. George's chest but this is mainly die-transfer in nature as the horse and dragon are both boldly rendered, as are the date and mintmark, and the rims and both border ornamentations are especially sharp, the surfaces being choice and possessing a lovely old-gold colour, an extreme Australian rarity and the most boldly detailed specimen known. [...] Far more than a choice coin, however, this special strike is without question the finest known example of Australia's rarest gold coin.

Noble Numismatic auction. Consigned by the grandson of Jacob Garrard, it was described as: Virtually unmarked, obverse well struck with good fields, reverse fields exhibiting mottling or pickling from die rust and grease, flat on St George's chest from metal flow to the obverse, uncirculated and excessively rare. Estimated at $600,000 AUD.