You are: Home » Australian coins » Articles » 5 cent - Errors and Varieties

The following content comes from the Ian Hartshorn personnal website, which not longer exist since 2010. To keep this information available to the public and for a perpetuity reason, we reproduced it here. 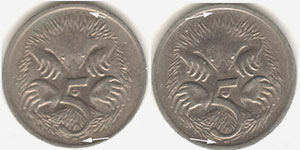 The Echidna design on the 1972 5cent has two different positions on the dies. The left is higher than the right. The design themselves are the same size, but can give the impression of being a small and large design, similar to the 1984 and 1986 coins. 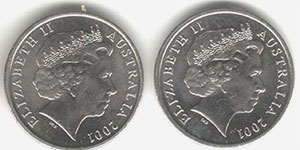 Earlier this year (2004) two different Reverses for the 1984 5 cent coin were brought to light, these Reverses are different in size. John Cook, the President of the Metropolitan Coin Club of Sydney, found the coins as mentioned in the Australasian Coin And Banknote magazine (CAB) article.

A later article in CAB, where Lyndsay Bedogni notes that the same difference in the Reverse occurs in the 1986 mint set only coin.

Spotting the difference between the two different Reverses can be easily done, check the distance between the rim and the designer initials at the bottom of the coin (K-6). It should be noted when checking these coins, also check the top to ensure it is not slightly off-centre.

Note - 1985 had a new Obverse on all denominations 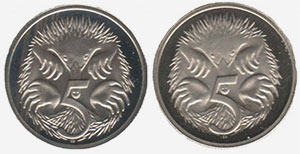 The Ian Rank-Broadley effigy was much larger than the previous design. This caused certain problems during coining and in some cases we experienced poor die life. One problem being the volume of metal flow, due to the large design. In order to correct this, we eventually reduced the size of the image on 5 cent coins which resulted in the small variation that you have observed. The introduction of the new effigy resulted in variations on most obverse designs up to 2001 and you have no doubt observed many of these! Indeed, the Mint is constantly evaluating the performance of its coinage tooling and introducing subtle modifications in order to improve efficiency and quality.

Other differences to look for on the LARGE obverse, the legend is closer to the rim, 3-4 faint line marks on the neck are missing, and the designer initials "IRB" are wider apart with the R & B not joined.