You are: Home » Australian coins » Articles » 2 cent - Errors and Varieties

The following content comes from the Ian Hartshorn personnal website, which not longer exist since 2010. To keep this information available to the public and for a perpetuity reason, we reproduced it here.

Often when researching different aspects of numismatics, official information can be ambiguous or even not available, this is the case when trying to determine which mint produced which type of 2 cent coin. Differences have been found with 2 cent coins in the years 1973 to 1983, and I was glad to learn recently that this is a "Re-Discovery" that I had made. With extra information gathered over the past couple of years, I am confident that the Perth and Canberra minted coins can be distinguished.

In determining which type of 2 cent is from which mint, I use this points; shape of the mintmark claw, obverse fishtailing, error coins, mint & bank rolls, opinions of others, Perth mint Verses Canberra mint.

Shape of the mintmark claw

An obvious difference can be seen between 1 & 2. The short claw 3 is shorter and not as pointed as the Canberra sharp claw, and not as blunt as the 1960s blunt claw of Perth. These short claws have only been found in the years 1973 to and including 1983. The same years the Perth mint produced 2 cent coins. 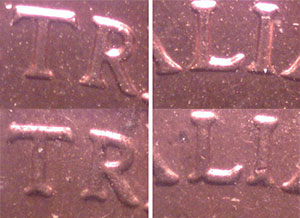 "Flat" based letters and "Curved" based letters. Curved based letters are also known as "fishtailing". Articles by Jon Saxton & John Sharples are worth reading to get an insight as to how or where this effect takes place. It should be noted that Jon Saxton's is a work in progress.

How, when or where this fishtailing occurs I leave to others to decide, what is important, is that it occurs on 2 cent coins.

Predominantly "clipped planchets" and "ram strikes", after viewing a considerable number of these types of errors and noting the short claw and or fishtailing, I have only come across 1 clipped planchet (curved), and 1 ram strike I would class as coming from Canberra during the period 1973 to 1983.

1966 curve, straight and rim clips I have, are from Perth and Melbourne, none from Canberra. The relevence I place on this, is the quality control within the mints. Clips and ram strikes in the years where the Perth mint did not strike any 2 cent coins are very difficult to find.

Perth minted 2 cent coins where sent to the Reserve Bank in bulk and the Bank rolled them in "Reserve Bank of Australia" paper.

The following information regarding the rolling of currency coins was supplied by decimal coin specialist, Kevin Ayres of Canberra Numisco. Kevin reports that from 1973 to 1983 coins from Perth, Wales (UK) and Canada were delivered loose to the various branches of the Reserve Bank of Australia where they were machine rolled in Reserve Bank printed paper.

Two simple words "Omitted" & "Missing" can have the same or vastly different meanings when it comes to coins. With pre-decimal coins both words can apply, but with decimal coins 'missing' is the appropriate one to use at this time. This is in relation to the pre-decimal mintmarks and the decimal designer initials.

To clarify the 'omitted/missing' words, in pre-decimal times the mintmark "I" for the Indian minted pennies was punched onto a die or hub. If, for some reason, the "I" was not punched onto the die/hub, then it was "omitted" from the die. If the mintmark was initially on the working die, but didn't show up on a coin, then "missing" from the die would be the appropriate term (an example of this is die filling). On decimal coins, the designer's initials are on the plaster casts, and if all goes well, will appear on the reduction punch and then on to the working die. The "SD" initials could only be termed "missing".

The missing SD initials on 2 cent coins came to light soon after decimal currency was introduced back in 1966, with a letter to the Editor in the Australian Coin Review (ACR) August 1966 by Mr. J. Cook. A number of other keen collectors of decimal coins found more of these types of coins in the ensuing years, - with a Pat Gibson of Southport answering a query in July 1975, quote

In closing to help answer 'Paul Adler's' variety question about the 1966 two cent piece: Some friends and myself 'chased' the 1966 two cent, no designer's initials, back when they were first issued and we all ended up with a few each, thus establishing the fact that they were of no great rarity and though a good variety will probably not amount to anything. The same variety also exists in the 1967 two cent piece but much harder to find. - Yours etc.

The "missing SD" two cents first came to my attention in the ACR - Dec 1996 (Letters) by Jerry Hamelfarb. I found I had a 1968 in my collection, and in the ensuing years found some 1966, 67 and 81 examples. Several years further on, some more information came to light in the Tasmanian Numismatist Internet Edition - Feb. 2001, March 2001 and May 2002. Two excerpts from these:

[Feb 2001] This is in fact a proven example that the ACGS has graded and Spinks has acknowledged. It's not a soft strike or filled die as there is no residual material under extreme magnification - this was a die that simply didn't have the initials engraved. [May 2002] It is not a deteriorated or plugged die as the coins are well struck and show no disturbance to the 'Flow' lines. Under a 20x stereoscope-they were struck that way - without the SD as opposed to other 2 cent pieces that do show deterioration of the letters SD.

[March 2001] Mos (Byrnes) advises caution in inspection and then drawing incorrect conclusions about decimal bronze varieties - particularly those that have also had a chance to age a little 'ungracefully' over the last 35 years - as many examples of soft-strikes and filled dies are becoming evident.

Frank Thomas (CGA) was keen to talk about these coins, and mentioned that he has found that most examples of the missing SD are a case of a "filled die" in the vicinity of the designers initials. He also mentioned he was keen to establish if possible, whether the missing SD was a filled die or not. After sending him two 1981 gEF coins, an opportunity to put together a parcel of uncirculated coins arose. With the help of Peter Andrews and Murray Pearce (Ebid/Downies) and some Uncs of my own, a total of ten coins; - 1x1966, 5x1967, 1x1968, all Unc, 2x1981 gEF, and 1x1966 lower grade (to check on a doubling aspect of the coin) were able to be checked at the one time.

Several people including Scott Wren, Frank Thomas and staff at CGA and myself were able to check all the coins together, with Peter Andrews checking the majority of the UNCs. We all come to the same conclusion, that for whatever the reason, in most cases, the SD initials were missing from the die/s before going into service.

Given that the lizard's back left foot looks similarly weak on the coins struck from both dies I am beginning to suspect that the filling of the initials occurred on the master die, so that the SD was always missing from a few working dies. In this sense, maybe we can describe the 1967 2c no SD as a genuine missing initials variety.

1967 A fairly hard 'Missing SD' to fault, as I could find no real tell-tale sign of any remnants of the 'SD' under x30 magnification ... but again, it would be a very bold and audacious move to call such a coin as anything other than a very nice example of a 'missing SD'.

1968, this is the one that in my own opinion, as well as Frank's, that we feel that this particular coin may have undergone some "Cleaning" at some point in its life? This coin shows the obligatory weak back foot that is synonymous with the 1968 2c. And there is a discernible 'S' just visible ? well I was able to observe it anyway, that would probably change if I was to look at it again in 6 months time.

The 1966 lower grade coin was too far gone to make any judgement on the doubling aspect or the SD. A 1981 - "Incongruous field disturbances" (the field at the effected area is out of place with the surrounding field) suggesting it is a filled die. 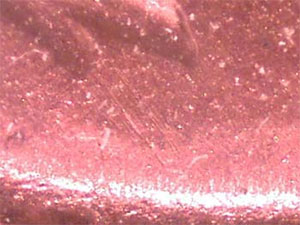 The comment by Scott Wren on the 1981 coins was very interesting. Some 8 months later, after sending out queries and waiting for responses as to whether the SD is on the plasters or not, a chance purchase of a roll of 1981 2c coins (auto count roll with the end of the wrapper damaged and sold at a discount), contained eleven coins with the missing SDs. What made these coins so interesting were the numerous parallel raised lines in the vicinity of where the designer's initials should be, my first impression was some sort of grinding/filing/polishing had taken place to the die, before putting it into service (maybe).

1981 2c coin note the parallel lines under the claw, all eleven coins exhibited these raised lines. On some coins the marks/lines are more prominent than others, possibly due to die wear.

Sending three of these 1981 coins off for other opinions, it is fair to say that the raised marks/lines on the field around the legs of the lizard were on the die as incuse marks and appear to have been some sort of cleaning/polishing action. Having held the view that the SDs were missing from the die/s before going into service on the earlier dated coins, and not filling during the coining process, these 1981 coins help reinforce my opinion that the missing SDs are a die variety.

Two things we do know about these coins:

My own thoughts on the subject are, that while there were three mints involved in minting the 1981 two cent, Canberra, Perth and Wales, at this stage I'm more inclined to believe the Perth mint to be responsible due to some traits similar to other 2 cent coins in the same era. The missing SD was missing from the die/s before going into service - due to the hubbing, annealing, cleaning/polishing processes. As to the scarcity/rarity of these coins, going by the mintage figures; 1966 - 217.73 million (scarce), 1981 - 81.06m & 1967 - 73.25m (very scarce) the 1968 - 16.99m (rare). I have observed the 1966 and 1967 coming up for sale in Unc grade and all dates in varing circulated grades from time to time, based on these observations, I suggest this Guide for the 1966 (extra for the others) VF $40, - EF $65, - Unc $100 to those chasing an example for their collection.

All comments are personal opinions only, they may not be the position or opinion of the company/business the individuals work for.