John Craven (J.C.) Thornthwaite was the first person to manufacture tokens and medals in Australia. He was born in England, the location variously recorded as County Cumberland or, according to information from his family, at St Batholomews Close, London, in 1820. At the age of 18 he was apprenticed to Slater Geoghegan of The Strand, Middlesex, as a stone, seal and gem engraver, for a period of six years (Dean, 1988).

In 1848 he married Ellen Parkin, and in the following year they migrated to Sydney. They had a large family - at least seven boys and two girls (family history records 10 known children). Two of their sons, John Sydney and Peter Spurr, both followed their father in his trade. The family told George Dean that Peter was 'the second last seal engraver to be trained in that calling in Australia.' 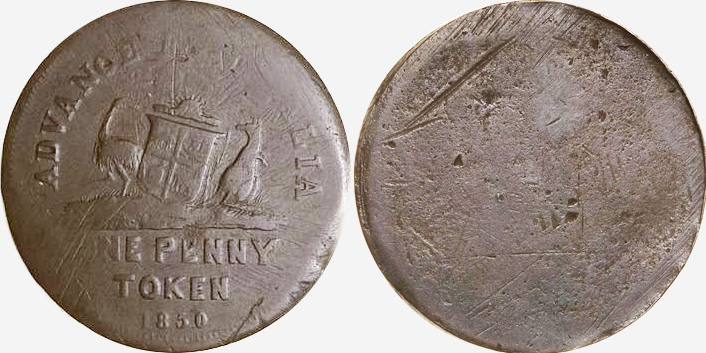 Thornthwaite's first known token was a trial pattern penny dated 1850. This pattern is known from a single example, now in the Museum Victoria collection (registration no. NU 4447). The next examples of his work are known as the 'Tea Stores' penny and half penny tokens of 1852 and 1853, created for Samuel Peek & Co.'s Tea Stores of 424 George Street, Sydney.

In 1854 he created tokens for himself, both pennies and half pennies. According to Dean these tokens are...

...noteworthy for their crude workmanship and lack of clarity of detail in design because the dies were not cut deep enough and they had little or no rim to protect the design on the 'soft' copper tokens, points that typified his early work.

Thornthwaite's most accomplished tokens were not copper but silver. In 1854 he made a small number of three-penny silver tokens for James Campbell of Morpeth, New South Wales, which were 'larger and thicker than normal currency issued' and consequently 'represented about 33% more in metal content and thus value' (Dean, 1988).

It would seem that Thornthwaite's problems with making good copper tokens were not easily overcome. In 1855 he made tokens for John Allen of Kiama, and his brother William of Jamberoo. Both sets of tokens were rejected because of their poor workmanship. Andrews relates that after John had rejected his tokens, they were 'disposed of by Thornthwaite at a penny each to the toll gatekeeper at Annandale [Sydney], who passed them on in change to the hapless wayfarers' (Andrews).

The problems with Thornthwaite's tokens were two-fold. Firstly, he had great difficulty obtaining suitable blanks. His first efforts were made by sawing sections from copper rods, which left marks on the faces of the tokens, and made it inordinately difficult to regulate the thickness and regularity of the blanks. His more accomplished efforts in copper are said to have been made from an old steamer's copper funnel, the blanks being stamped out from the metal.

The second problem was that he did not have the right tools or plant for making coins. Instead of die sinking tools, Thornthwaite used his seal maker's tools, which did not cut the designs in the right way. Using these unsuitable tools created designs that were shallow in their finish, and with poorly formed details. The problem with the engraving tools was multiplied by the lack of adequate plant. Instead of a specialised coin press he used...

...an old affair, and hardly suitable for the purpose, being worked on the same principal as a letter-copying press. Incapable of giving the necessary force, they weighted the stamper with some copper ingots, but no better results were obtained. They finally had recourse to a drop-hammer worked with a block and pulley, somewhat resembling the machines used on a larger scale for driving piles. This method answered only too well, as it not only gave the sharp blow required, but sent the dies flying in all directions, simply bombarding the inside of the workshop and rendering it somewhat unpleasant and unsafe for the occupants. (Andrews)

Dean has traced Thornthwaite's addresses through the Sydney directories.

The 1855 Waugh and Cox Sydney Directory lists John C. Thornthwaite as a Die Sinker and Medallist, Bourke Street, Surrey Hills. Dr. Andrews reports that c.1858-1860 he had his press at Leichhardt and was striking tokens for Hogarth and Erichsen... [in the] 1863 Sands Sydney directory he is listed as DIE SINKER of 173 Pitt Street.

In addition to his work as a token maker, Thornthwaite also worked as a medallist, particularly after tokens were made illegal in NSW in 1868. He made medals for the Horticultural Society of New South Wales in 1860 and 1868. Museum Victoria holds one of his 1860 medals.