Born at Wick, Scotland, after his schooling John Andrew was apprenticed to the drapery trade in Glasgow and was later successful in his own drapery business in bustling Sauciehall Street.

John migrated to Australia in 1853, arriving in Melbourne on 11 May, according to Gardner's biography. Victorian immigration records, however, show a John Andrew arriving in Victoria in November 1853, but not in May. In 1854 he was listed in a Melbourne directory as the owner of a drapery and outfitting business at 11 Lonsdale Street West. He was well placed to prosper in the years of the gold rush. He remained at the same address until at least 1869, as well as taking up premises at 21 Lonsdale Street West in 1863, and at 19 1/2 from 1864 to 1868. 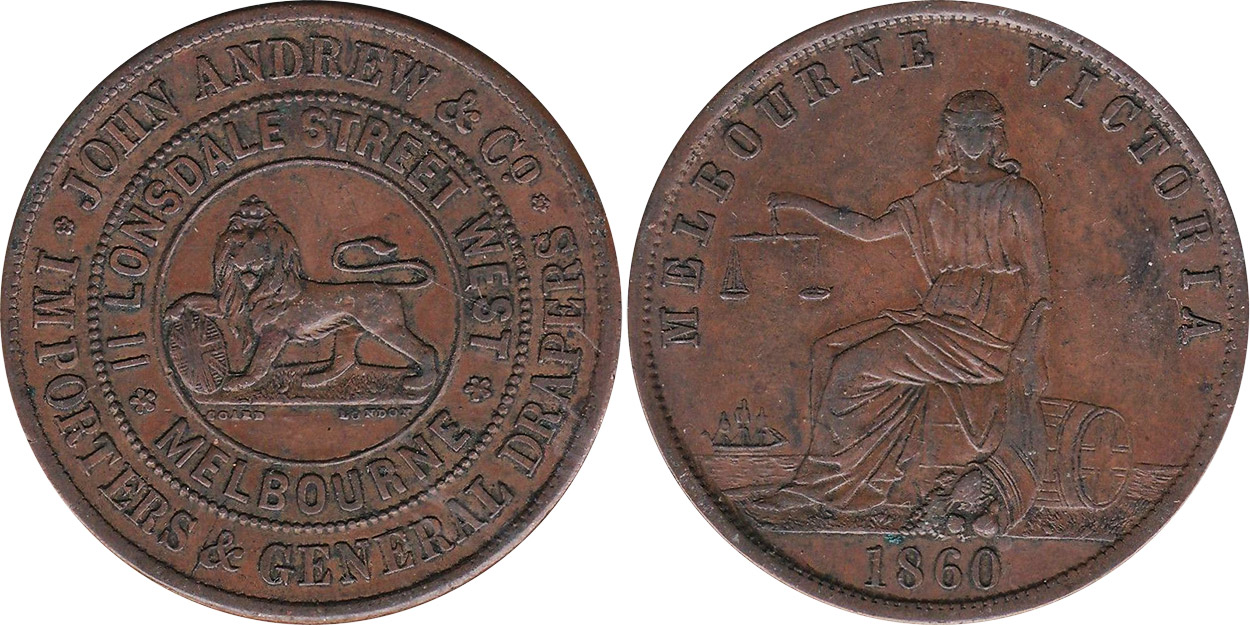 The token issues of John Andrew cannot be understood without realising that he and his business neighbour A.G. Hodgson (whose drapery and outfitting business was located at 11 Lonsdale Street West) made their arrangements together.

Both men made their orders tokens through a London agent named Coard, whose name appears on their tokens. It is thought that the dies were cut by Heaton and Sons (based on the design employed for Hide and De Carle, 1857 - 1858) and struck by W.J. Taylor in London.

In 1856 John married Ann Forbes, also from Wick. According to Gardner, John sold his business in 1869 to Christie and Berwick and retired to live privately. The 1870 Sands and McDougall Melbourne and Suburban Directory, however, still lists the business in his name.

Always a quiet, studious but determined person, in 1877 he was encouraged to stand for election to represent West Melbourne in the Legislative Assembly. He was duly elected and displayed his characteristic enthusiasm and progressive personality. At the end of his term, however, he retreated into retirement once again.

John and Ann had no children. John died on July 19, 1902 and Ann survived him for some few years or so.