Grundy was, according to Gardner, an Englishman from near London. Victorian immigration records include one John R. Grundy, who arrived in Melbourne on the Ben Nevis in January 1855. He opened a tobacconist's shop in 1856, in Ballarat, 'and was the principal tobacconist in the town.' In Ballarat Directories dated 1856, 1862 and 1865-1866, his address is given as Main Road, Ballarat. Gardner gives his address as Bridge Road.

In 1862 Grundy took out a half page advertisement in Birtchnell's Ballarat Directory, which simply read 'J.R. Grundy, wholesale tobacco and cigar merchant, Ballarat.' In 1864 he published a number of small advertisements in Ballarat's The Evening Post newspaper, which read: 'To connoisseurs! J.R. GRUNDY, tobacconist. Has Seven Years Old HAVANNAH CIGARS At 22s per Box, Cash,' (The Evening Post, 28 January 1864). These advertisements were not repeated every day, as many advertisements did in the papers of the time. It seems likely that Grundy was advertising the receipt of a batch of relatively rare and sought after items.

Gardner states that Grundy lost his shop in 1872 after speculating heavily. Afterwards he made his living by selling 'colonial cigars' in Melbourne and died in straightened circumstances in the early 1900s. 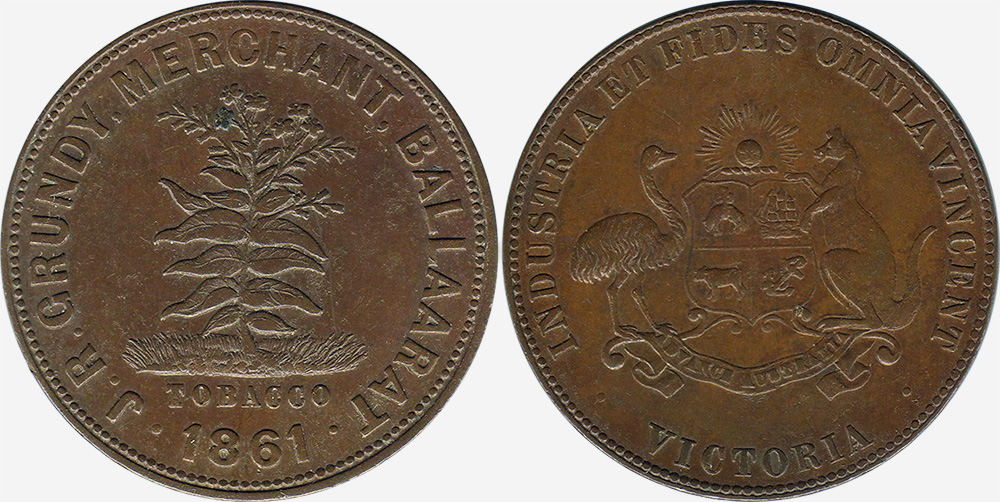 This issue employed two slightly different reverse dies which can be differentiated by the spacing of the lettering around the rim - in particular the distance from the bead before the word VICTORIA and the V is 3.4 mm on Reverse 1 but only 2.1 mm on Reverse 2. A quick test for Reverse 2 is that the bead to the left of the V has been entered over a letter I. 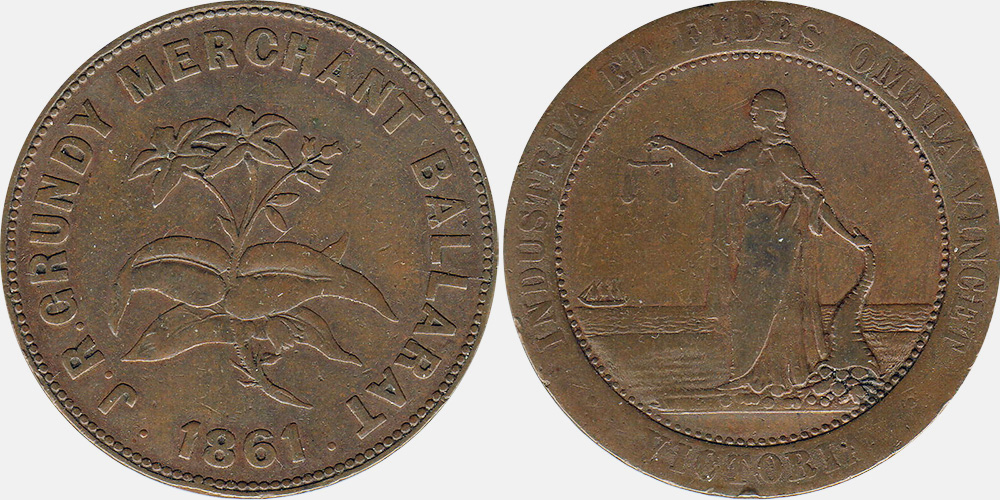 This issue employed two slightly different obverse dies which can be differentiated by the shape of the first bud on the right side of the stalk and the position of the growth of the first flower bud in relation to the central veins of the large leaf on the right. Obverse B has the first bud opening at right angles and the flower emerging entirely below the central vein. Obverse C has the first bud still largely closed and the flower emerging above the central vein. In addtion there were two reverse dies - Reverse 3 on which all letter A's are A with cross bar, and Reverse 4 where all letter A's are in fact an inverted V with no cross bar.