In the late 1840s there was a small change crisis in the Colony of New South Wales. It was perhaps most severely felt in Melbourne, the largest town in the Port Phillip District, and at that time still part of the Colony. In 1848 the Melbourne grocery firm Annand, Smith and Company, arranged for a private mint in Birmingham, England to make some copper pieces the same size as a penny coin. On one side they placed their name and business and on the other a figure of Britannia like the one on a real penny. When these arrived in 1849 they gave them out in change as pennies from their shop. There was outrage in the morning papers the next day demanding that the police and law courts take immediate action. However the tokens were not forgeries, they were not copies of real coins and clearly stated what company had issued them. Recently too, in 1811, private tokens had been issued in Britain, so no action was taken.

Over 15,000 Annand Smith tokens had been made and soon shops in the towns of Collingwood and Geelong sought supplies of them for small change. Other firms sent off orders to England for their own token pennies. By 1851, when Victoria had become a separate colony and gold was discovered there were a number of firms in Melbourne and Sydney issuing tokens.

The discovery of gold caused a population explosion. As the same coins were used in Britain and the Australian colonies, people travelling from England could arrive in Melbourne and use the coins in their pockets. These included some copper pennies, halfpennies and farthings – but not many. Imagine setting out for a three-month sea voyage to gold fields at the other end of the world – would you fill your pockets with heavy copper coins? Nor did they. 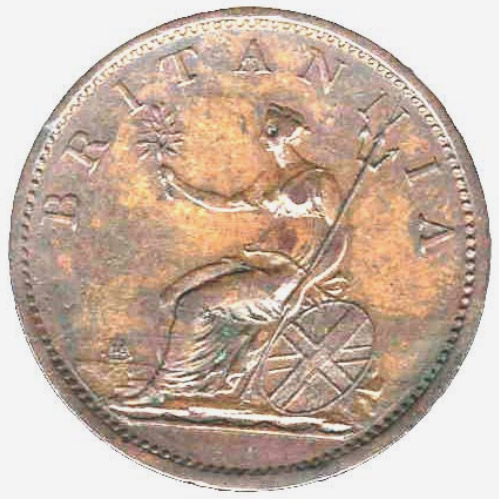 Australian colonial governments were not keen to take responsibility for providing coins. Coins were made in England and the British government could make a penny for less than a penny. The Victorian government could only buy one for a penny, then pay the cost of shipping and, once the coins were worn out, they would be responsible for replacing them. Colonial governments argued that the British would make the profit so they should bear the costs.

The retail trade already had a solution and the issue of tokens blossomed. Local production in Melbourne became possible with the importation of a coining press in 1854 but there remained problems with availability of copper. In New South Wales some tokens had been made from 1852, the copper blanks being laboriously hand sawn by an apprentice from copper rods. Dropping the dies from a great height impressed the design. In Melbourne a supply of halfpenny blanks came with the press so good quality tokens of that denomination could be made, but pennies were still brought from England until the 1860s. 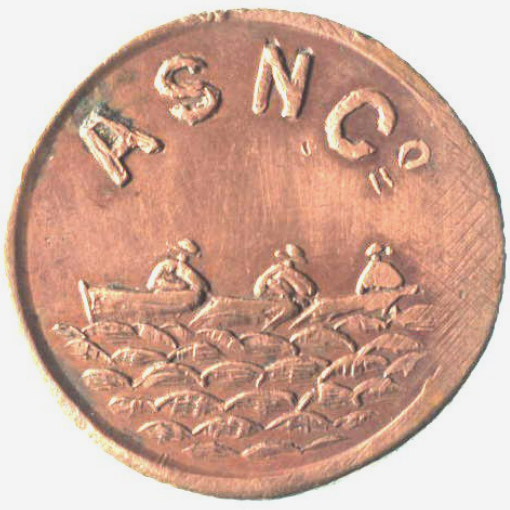 New South Wales Trade Token made with a drop hammer

In 1862 Thomas Stokes purchased a mill capable of making copper plate of the desired thickness. This saw tokens issued in such huge numbers that the government felt it had to act.

The end of token circulation

By then many of the early companies that had issued tokens had gone – without removing their tokens from circulation. Recent archaeological excavations in Melbourne have also shown that tokens from regional Victoria (particularly Geelong), from other Australian colonies and even Napoleonic era pieces from England were in circulation. In addition, the British changed their copper coins for lighter bronze pieces in 1860 and these were now legal in Australia; tokens mimicked the old fashioned coppers. The Victorian Government therefore ordered the circulation of tokens be stopped. Although some companies refunded and removed their tokens, all could not.

One result of this was a flood of Victorian tokens to New South Wales. Help was then sought from Britain. The Sydney mint gathered a sample of the tokens in circulation and sent them to London for analysis (they are still in the Royal Mint's collection). They were found to be of good quality copper and the British government accepted a request to purchase them at full face value. The tokens were withdrawn from circulation, shipped to London, melted, alloyed into bronze and struck into new pennies, halfpennies and farthings – at a profit. 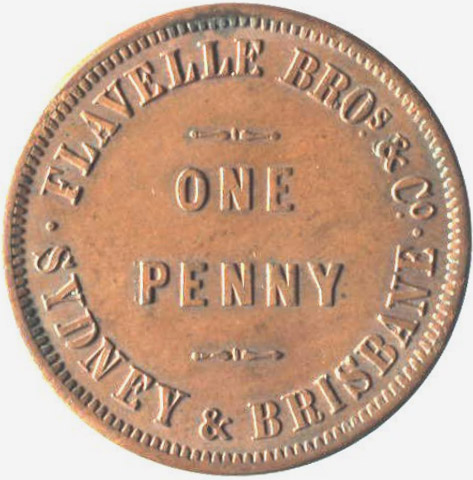 Some 330 000 tokens were withdrawn from New South Wales; the Victorian number would have been similar. There were 124 Australian firms that issued tokens and they were issued in every colony. Tokens, many made in Melbourne, were also used in New Zealand until 1881. Collectors seek examples of each firm's penny or halfpenny and even tiny variations in designs that indicate that different dies were used. Almost no records of token production have survived, so researchers must rely on the tokens themselves to unravel questions about their production, and on archaeology for an understanding of their circulation. The best collection of Australian tokens in the world is in the Museum Victoria Numismatics Collection.