Queen Elizabeth II died on September 8, 2022 at Balmoral Castle in Scotland, her summer retreat. She was 96. Since opening in 1965, the Royal Australian Mint has produced over 15 billion decimal coins bearing the effigy of Her Majesty Queen Elizabeth II.

Here's a list of major changes in coins and banknotes that mark the progression of Queen Elizabeth II reign. 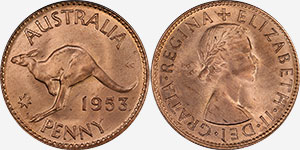 In 1953, Elizabeth II, the new head of state, made her first appearance on Australian coins after she succeeded to the throne on February 6, 1952. From a total of 17 plaster models, the Royal Mint Advisory Committee under the Presidency of His Royal Highness the Duke of Edinburgh chose the submission by Mrs. Mary Gillick for all denominations.

The only pre-decimal banknote featuring the Queen is the 1 pound.

With the transition to the decimal currency, the obverse of the coins presented few problems. The preparations for the introduction of a new coinage coincided with the approval by Queen Elizabeth for a new effigy to be used accompanied by a simplified inscription. The new effigy of the Queen takes up a larger proportion of the outer rim effectively requiring the inscription to be broken up into two sections.

Even in later simplified versions like the final pre-decimal coins with ELIZABETH II DEI GRATIA REGINA F.D., these inscriptions had only limited meaning and significance for the average Australian. The new inscription positively identifies the Queen's effigy, identifies each coin as Australian and shows the date of issue.

The front of Australia's new $1 banknote bore a portrait of the Monarch, Queen Elizabeth II,based on a photograph from 1984, and a representation of the Australian Coat of Arms.

Designed by Raphael Maklouf and chosen on August 8, 1984, he is a British sculptor and most known for designing an effigy of Queen Elizabeth II used on the coins of many Commonwealth nations.

Since 1992 (excluding the 2001 commemorative note), the Queen appears on the $5 denomination. The portrait of the Queen on the new banknote has been redrawn from the same photograph. Technological advances mean more detail can be achieved in the design and the portrait on the new polymer banknote more closely resembles the original photograph. 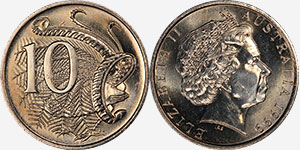 Designed by Ian Rank-Broadley and like Maklouf, he is a British sculptor who has produced many acclaimed works, among which are several designs for British coinage 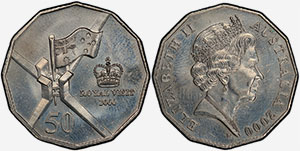 During the year 2000, Royal Australian Mint designer Vladimir Gottwald's effigy was used on the 50c Royal Visit coin only.

In 2016, to celebrate the 50th anniversary of the decimal currency, the Royal Australian Mint released special edition coins with the obverse showing a very small effigy.

The most recent effigy of Her Majesty, designed by Jody Clark, is the sixth effigy to appear on Australian coinage. This effigy has been used since 2019.