You are: Home » Australian coins » Articles » Pre-Decimal Proofs and Patterns 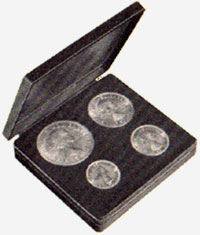 To celebrate the first home striking of Australia's silver coins, the Melbourne Mint issued a collector proof set in 1916. Apart from this, very few proof coins of dates prior to 1920 are known to exist. From 1920 onwards, a limited number were struck each year for presentation to Museums, etc. These are mostly classified as Proof Record Pieces and, not being made available to the public, precious few have found their way into private hands.

In 1934 and again in 1935, a coin dealer in New Zealand, Mr H Williams, succeeded in obtaining a limited number of proof coins struck at his request. It was not until 1938 that proof coins were sold to the public at a premium by the Melbourne mint. All denominations, including the 1937 and 1938 Crown were struck in proof. The practice was repeated in the following year. Exact figures are unknown for 1938 and 1939 releases but the numbers are tiny.

Proofs, patterns, trials and/or specimenns dated prior to the mid-1950's are all extremely rare with only a handful of specially prepared coins being produced, all for official purposes and very few specifically aimed at collectors.

By 1955, numismatics as a hobby had gained sufficient momentum for the Melbourne and Perth mints to produce specially struck coins for collectors at an issue price of two shillings each above face value. The coins were sold as individual pieces without packaging until 1960. They were wrapped in grease proof paper envelopes (Melbourne) or cellophane (Perth). 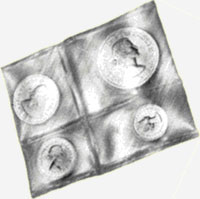 An improvement was made in 1960-61 when 4 coin (3d, 6d, 1/- & 2/-) Melbourne sets were issued in a sealed polythene sheet. For the years 1962-63, a black plastic box was used. This was a backward step as the coins were again unsealed and could only be viewed from one side without handling. Pre-decimal proofs can be difficult to distinguish from their circulating counterparts as the technique of double struck frosted designs on mirror fields in use today was not then available.

Unlike the Non Circulating Legal Tender issues which are released regularly now, the Australian Government placed restrictions on the production of pre-decimal proof coins. Only those coins which were struck for circulation were to be issued as proofs. For the Perth Mint, which operated as a bronze producing mint, this restricted proof strikings to pennies and halfpennies.

The values of proofs and patterns in perfect condition are shown in the date listings of this catologue. Proofs with marks, spots or uneven toning will normally be significantly discounted.