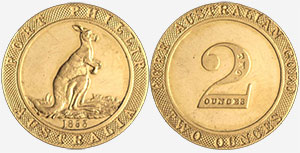 No one is sure exactly how many Port Phillip pieces remain in existence. What actually occurred during the 3 years that the Kangaroo Office operated is unclear and mainly conjecture. When he finally gave up and sold his equipment to Thomas Stokes, Taylor is believed to have ordered Morgan Brown to take the dies for the gold pieces and sink them out in the bay in deep water.

These coins were made in 4 different denomations:

The evidence that this was not done was uncovered when the dies turned up in the Stokes & Sons factory in the early 1900's. In 1917, the company struck lead replicas of all 4 gold pieces for the Numismatic Society of Victoria.

Forgeries of all denominations exist.

The Perth Mint celebrated the 140th anniversary of the release of the Kangaroo Office gold pieces by issuing a privy marked 2oz silver bullion kookaburra coin in 1993.

Reginald Scaife, manager of the Kangaroo Office, arrived in Melbourne on 26 October 1853 on board the clipper Kangaroo. The Kangaroo had been built, chartered and outfitted by a group of London entrepreneurs looking to exploit the Victorian gold rush, which was then in full swing.

Scaife's wife and child were on board with him on the 'Kangaroo', along with stock for the business and the crated parts of a prefabricated building. There was also a hand-operated screw press, a number of dies for striking halfpenny tokens (some already cut in London and others ready to be cut to order in Melbourne) and a supply of halfpenny-sized copper blanks. The dies were the work of W.J. Taylor, a noted London diesinker, engraver and medallist.

Arriving in Melbourne at the peak of the gold rush, Scaife found it difficult to obtain a site for the business, or labourers to construct the building. In addition, the press was too heavy for the dockside cranes to lift it from the ship and it had had to be taken apart to be unloaded. He eventually located premises in West Franklin Street, finally opening for business around April 1854.

After battling to build the store and prepare the press, the Kangaroo Office was not a success. Melbourne was not the centre of opportunity that the business' backers hoped it might be. The colony was glutted with stores and supplies similar to those brought out on the 'Kangaroo', and few people saw any need for halfpenny tokens to be struck on the press. During his time operating the Kangaroo Office, Scaife struck only five issues of tokens and had difficulty meeting his costs.

The Kangaroo Office's most successful operation was at the 1854 Melbourne Exhibition, where the press was set up to strike tin tokens commemorating the event. Scaife won an award at the Exhibition for the tokens he struck there.

Before the end of the Exhibition, Scaife also struck 27 sets of gold tokens from purpose made dies, ranging in weight between two ounces and a quarter of an ounce. Today these tokens are known as Port Phillip Gold tokens. Two sets were exhibited at Melbourne then to be sent to the 1855 Paris International Exhibition. These pieces are extremely rare today; the only known complete set is held by the British Museum. Since the mid-19th century, these tokens have been represented to collectors as patterns for a proposed Victorian currency. Because of the interest numismatists have for patterns, as the origin of an issue of coins, this story has given the Port Phillip Gold tokens great value to numismatists. Contemporary records, however, indicate that Scaife struck the tokens for sale as mementoes of the Exhibition in an attempt to stimulate his ailing business.

It has been argued that W.J. Taylor came to Melbourne and established the Kangaroo Office, because his signature is to be found on the tokens minted there (eg. McDonald 1992). However there is no evidence that he came to Australia. Taylor's name is on tokens and medals attributed to the Kangaroo Office because either they were struck in his mint in London, or Scaife was using dies that Taylor had made for him.

In 1857 the Kangaroo Office closed and the press was sold to Thomas Stokes. In the intervening period the press appears to have stood idle, and Scaife acted as an agent for Agricultural Societies, sending orders for medals to Taylor in London. Having failed in his attempt to combine storekeeping and operating a mint, Scaife became an agent for the Victoria Insurance Company and remained in Victoria for a number of years before returning to England.