You are: Home » Australian coins » Articles » Most expensive Australian certified coins sold in 2020

Marked by the special sale of The Caranett Collection of Sovereigns by Heritage Auctions last summer, a lot of rare Australian gold coins characterize this list. Because of the restrictions and limitations on social gatherings around the country, most auctions were online exclusively, without any attendance at physical shows. Nevertheless, the rising prices for precious metals attracted and animated the Australian coins market.

With a very low mintage of 240,121, this is one of the rarest Melbourne sovereign ever produced. Most of these gold coins were melted. 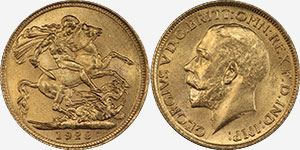 With a low mintage of 416,000 and many of them melted and converted into bars for the Bank of England in the early 1930's, an estimate number of 25 of this sovereign have survived.

An outstanding selection from the Sydney mint with exquisite, harvest-gold color that dazzles across fresh, satiny fields, tied for finest graded by either NGC or PCGS. Other than a few small ticks on the reverse motif which preclude a finer designation, this piece is seemingly free of any noteworthy blemishes.

This coin was found by a metal detectorist at Bay of Plenty, New Zealand, February 2020. The single rarest date of the Sydney 1/2 Sovereign series, and likely one of the most difficult of the entire Victorian 1/2 sovereign series. Standing as the first emission of the newly established Royal Mint branch at Sydney, the 1855 carries a mintage of only 21,000. An estimation of 10 to 15 are known.

Like the two previous coins on this list, most of these sovereign were melted, which makes it scarce. Another example sold in January 2020, certified MS-65 NGC for $38,280. 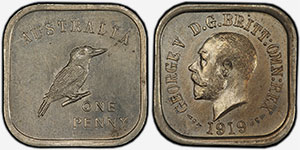 In March 2020, this Kookaburra Penny was sold by International Auction Galleries.

The Australian Government wanted to replace the circulating Half Penny and Penny in 1919. Trial square patterns, the Kookaburra, were minted by the Royal Mint in London and specimens in Royal Mint in Melbourne. Because there awkward shape and low weight revealing technical difficulties it was decided to not put them into circulation.

Kookaburra pattern pennies of 1919 to 1921 are perhaps the most recognizable designs in the series. This example is the finest for all varieties yet certified by NGC.

In June 2020, this one pound was sold by International Auction Galleries. It was described with surface marks, but with good detail and well struck up Obverse with some lustre.

Because of the tremendous shortage of coins at that time in Australia and while gold dust and nuggets were in ample supply, it was decided to create one pound coins as a way to convert that gold into circulating currency. But the government of South Australia, didn't wait for Royal assent and England approval, saying that the Assay Office was not a legal entity and should not be striking the coins, before producing a short quantity of these one pound gold coins. Therefore, the amended 1852 Bullion Act was rejected.

Only 100 of these proof coins were made.

An outstanding selection from the Sydney mint with exquisite, harvest-gold color that dazzles across fresh, satiny fields, tied for finest graded by either NGC or PCGS. Other than a few small ticks on the reverse motif which preclude a finer designation, this piece is seemingly free of any noteworthy blemishes.

The Kookaburra Patterns of 1919-21 were produced in an effort to replace what was considered a bulky minor coinage in bronze. Although the weight was cut in half, the added cost of importing nickel and, strangely enough, of retooling vending machine mechanisms, resulted in the cancelation of the proposed changes to the coinage.

Pictures by PCGS. Prices are in $AUD.