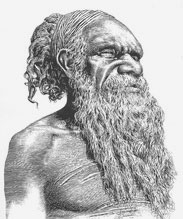 To replace the $2 banknote last printed in 1988, the Royal Australian Mint launched the $2 coin the same year. Cost considerations, durability issues, reduced cost of producing Australia's currency and this change proved a cost-saver for some businesses by reducing the need to unfold, sort, and count $2 bills.

The regular image on the reverse of Australian two dollar coin represents an archetype of an Aboriginal tribal elder, designed by Horst Hahne. It was inspired by an artwork by Ainslie Roberts and modified in line with coin production requirements. Roberts used some features of Gwoya Tjungurrayi, otherwise known as One Pound Jimmy, as inspiration when creating a portrait depicting a traditional Aboriginal tribal elder. The rest of the features were derived from Roberts' imagination and visual memory developed after drawing thousands of images of Indigenous people.

This denomination has since been used for several commemorative designs starting in 2012 with the well know Poppy coins. The following list includes all 2012 to 2021 commemorative coins issued for circulation. 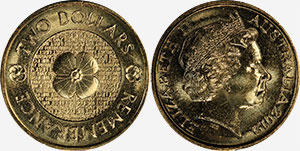 Designed by Aaron Baggio, it commemorates Remembrance Day with an image of a poppy, blank and red-coloured. In 1997, Governor-General Sir William Deane issued a proclamation formally declaring November 11th to be Remembrance Day, where Australians can observe a minute silence at eleven in the morning on November 11th each year, to remember those who died or suffered for Australia's cause in all wars and armed conflicts. This date is universally associated with the remembrance of those who had died in the First World War. 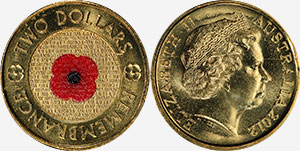 In Australia (and other countries of the Commonwealth), the poppy is recognise as the commemorative flower of remembrance. The flower is a reminder of those who lost their lives or suffered in wars, conflicts and peacekeeping operations. It's an international tradition that began in the early 1900s, after World War I. During World War I, red poppies were among the first plants to grow on the Western Front in Europe. They bloomed across the wasted battlefields of northern France and Belgium. 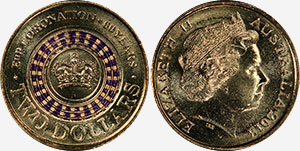 Issued to commemorate the 60th anniversary of the Coronation of Her Majesty Queen Elizabeth II with concentric purple stripes and a central design feature of St. Edward's Crown. The coronation of Elizabeth II took place on 2 June 1953 at Westminster Abbey in London. Elizabeth II acceded to the throne at the age of 25 upon the death of her father, George VI, on 6 February 1952.

St Edward's Crown is the centrepiece of the Crown Jewels of the United Kingdom. Named after Saint Edward the Confessor, who ruled from 1042 to 1066, it has been traditionally used to crown English and British monarchs at their coronations since the 13th century. 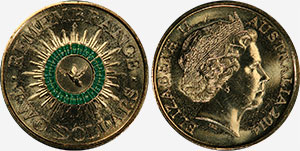 Commemorating Remembrance Day with a dove and olive branch surrounded by concentric green stripes and rays of sunlight inspired by the original Rising Sun badge, also known as the General Service Badge or the Australian Army Badge, of the Australian Commonwealth Military Forces.

The badge is identified with the spirit of ANZAC, the legend of the Australian soldier due to its association with the landings at Gallipoli in 1915. New recruits receive the badge with their initial issue of equipment, which happens within their first three days of enlistment. The peaceful dove is a pigeon native to Australia and New Guinea. 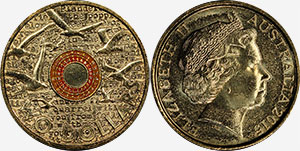 Issued to commemorate In Flanders Fields by John McCrae sculpted larks surround orange coloured rings representing the sunset glow. In Flanders Fields was first published in England's Punch magazine in December 1915. Within months, this poem came to symbolize the sacrifices of all who were fighting in the First World War.

In Flanders fields the poppies blow
Between the crosses, row on row,
That mark our place; and in the sky
The larks, still bravely singing, fly
Scarce heard amid the guns below.

We are the Dead. Short days ago
We lived, felt dawn, saw sunset glow,
Loved and were loved, and now we lie,
In Flanders fields.

Take up our quarrel with the foe:
To you from failing hands we throw
The torch; be yours to hold it high.
If ye break faith with us who die
We shall not sleep, though poppies grow
In Flanders fields. 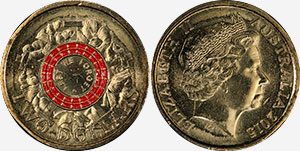 A 2 dollars coin to commemorate 100 years since the Anzac Cove landings, inspired by the poppy, the distinctive and powerful red coloured print encapsulates the solemn words Lest We Forget. On 25 April 1915, 16,000 Australians and New Zealanders, together with British, French and Indian troops, landed on the Gallipoli peninsula. The invasion was part of a campaign to capture the peninsula and help naval operations in the Dardanelles straits and relieve pressure on Russian forces who were fighting Turkish forces on the Caucasus front. 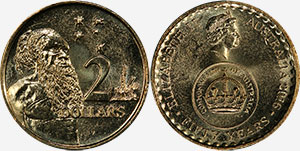 This commemorative 2016 coin had his obverse design changed to celebrate the 50th anniversary of decimal currency. On Valentine's Day 1966, Australians woke to a brand-new currency. The decision to change from the Australian pound (with its awkward shillings and pence) to a decimal currency - the Australian dollar - had been a pragmatic, economic one. Yet decimalisation became an opportunity for Australia to assert itself as an increasingly self-assured and forward-thinking country.

To make the transition easier for users, the decimal denominations matched their pound/shilling/pence counterparts - for instance, the $1 bill replaced the 10-shilling note. However, the overall look and feel of the notes was radically different to anything Australians had seen before. Read more - Defining moments: Decimal currency » 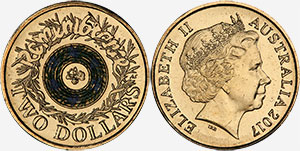 2 dollars with the distinctive pointed leaves and purple flowers of the herb rosemary make a moving and evocative design. Rosemary is an ancient symbol of remembrance, and has particular significance for Australians as it can be found growing on the wild slopes of Gallipoli. Sprigs of rosemary are worn on Anzac Day and Remembrance Day, by veterans and others attending services and parades. From the poem: For the Fallen by English poet Laurence Binyon.:

They shall grow not old, as we that are left grow old:
Age shall not weary them, nor the years condemn.
At the going down of the sun and in the morning
We shall remember them 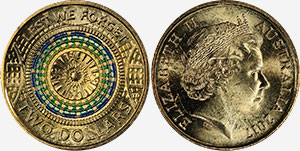 This coin represents an artistic depiction of Napier Waller's mosaic from the Australian War Memorial's Hall of Memory. Waller is a muralist, mosaicist and painter in stained glass and other media and was chosen to create the decorative elements in the Hall on Memory, including the stained-glass windows and mosaics. Despite having lost his right arm during the First World War, Waller was actively involved in the entire process.

The Hall of Memory, set above the Pool of Reflection, is the heart of the Australian War Memorial. It can only be reached by walking past the names of the more than 102,000 who have given their lives in the service of this country. The Memorial was conceived in the years after the First World War, though difficulties with budget and design delayed construction until 1936. 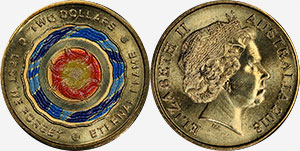 With a design that is inspired by the Eternal Flame at the Australian War Memorial, this coin was designed by the Royal Australian Mint. The Eternal Flame is a sculptural feature of the Pool of Reflection in the commemorative courtyard of the War Memorial. It is a perpetual reminder of the service and sacrifice of more than 100,000 Australians who have given their lives in war. It was installed in 1988. 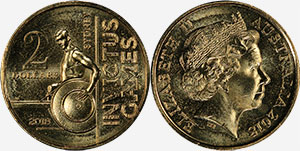 This coin was released to mark the 2018 Invictus Games. The Invictus Games is an international sporting event for wounded, injured and sick servicemen and women, both serving and veterans. The Games use the power of sport to inspire recovery, support rehabilitation and generate a wider understanding and respect of all those who serve their country.

In November 2016, Sydney, Australia, was announced as the host city for the 2018 games. All 17 countries from the 2017 Games were invited back, with an invitation extended to Poland. 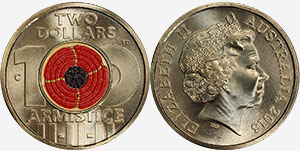 This coin honours those who have fallen and commemorates the 100th anniversary of the First World War Armistice, signed on November 11, 1918. After more than 4 years of fighting and the loss of millions of lives, the guns on the Western Front fell silent. Although fighting continued elsewhere, the armistice between Germany and the Allies was the first step to ending World War I.

To honor veterans of that and subsequent conflicts, most member states of the Commonwealth of Nations adopted the name Remembrance Day, and the United States chose Veterans Day. 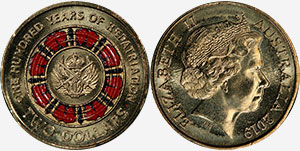 This 2019 $2 coloured coin commemorates a century of repatriation in Australia. Australian soldiers returned home to Australia was called repatriation. It occurred both during and at the end of World War I. One aspect of repatriation was the creation of the Repatriation Department, which still operates today as the Australian Government Department of Veterans' Affairs. 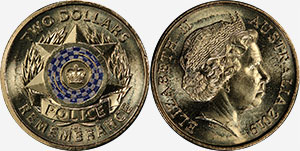 This 2019 $2 coloured coin commemorates the 30th Anniversary of National Police Remembrance Day. Each year, the 29th September holds a special significance for Police throughout Australia, New Zealand, Papua New Guinea, Samoa and the Solomon Islands. It is a day for police to pause to honour officers whose lives have been cut short while performing their duty as a police officer. 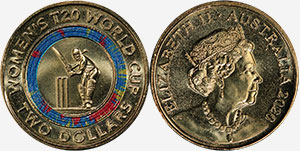 In honour of our women's national team, the Royal Australian Mint have teamed up with the ICC (International Cricket Council) to release a limited edition $2 coin. This $2 coloured coin features an image of a cricketer poised to bat, surrounded by the colours of the ICC Women's T20 World Cup logo. 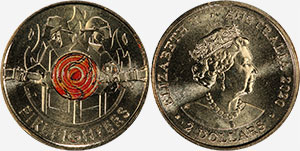 On October 29, 2020, 12 months on from the devastating bushfires that swept the nation, the Royal Australian Mint launched a coloured $2 commemorative coin honouring Australia's Firefighters, following the release of a circulating coin of the same design. Speaking at the launch of the coins, Royal Australian Mint General Manager, Mark Cartwright announced that $125,000 dollars from the proceeds from the sale of the coins will go to fire and emergency service organisations across the country. 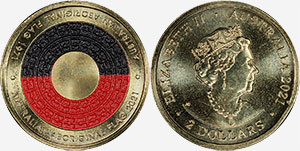 To commemorate the 50th Anniversary of the Aboriginal Flag. The flag was designed in 1971 by Harold Thomas, an Aboriginal artist who is descended from the Luritja people of Central Australia. Thomas held the intellectual property rights to the flag's design until January 2022, when he transferred the copyright to the Commonwealth government. The flag was designed for the land rights movement and became a symbol of Aboriginal people of Australia.