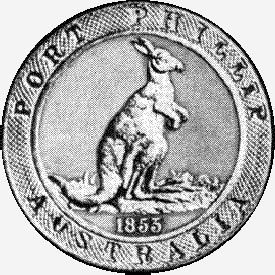 The Port Phillip Kangaroo Office Mint was a wholly private affair concerned with making a profit from coins. The coins eventually materialised but the profits did not.

At about the same time as London folk were being told that the new Adelaide coins contained 10 percent more gold than their face value, there came fresh news that gold was being bought direct from the miners at the Ballarat goldfields for £2 15s per ounce. With the official value being pegged at £4 per ounce, it occurred to London die-sinker and engraver William Joseph Taylor that there were still severe shortages of gold coins in Victoria. The firm of Messrs. Hodgkin, Taylor and Tyndall proposed to set up a mint in Melbourne by buying gold at £2 15s per ounce and turning it into £4 per ounce gold coins.

In 1851 Taylor had exhibited a coining press at the Great Exhibition and for his latest adventure had no trouble finding wealthy backers to provide him with a fully supplied ship for his trip to Melbourne. Sailing on a chartered vessel, the Kangaroo, Taylor arrived on 23rd October, 1853. Here, the problems which would ultimately doom the project to failure struck. The wharves at Melbourne had no facilities for manhandling the press dockside in one piece. Many months were lost as the press was stripped down to be moved.

In the meantime, a large shipment of sovereigns arrived from London and the price of gold at Ballarat almost doubled to £4 4s an ounce. Dies to strike ¼ ounce, ½ ounce, 1 ounce and 2 ounce gold coins had accompanied the high-spirited team from London and with the new price of gold these were now useless.

Taylor was a resourceful man, however, and refused to give in. He opened the Kangaroo Office almost immediately, although it was almost eight months before the press was reassembled. The Port Phillip Kangaroo Office struck gold issues of two (£8), one (£4), half (£2) and quarter (£1) ounces dated 1853. All issues are extremely rare. Taylor then exhibited the press at the 1854 Melbourne Exhibition in an attempt to attract a new trade of striking tokens and medals.

When this failed, Taylor and his backers admitted defeat. The press was sold and orders were given for the dies to be tossed into Port Phillip Bay. This was not done, however, and the dies for the ¼ ounce and 1 ounce were later found by Stokes & Sons in Melbourne, to whom the original press had been sold. Now operating as Stokes (Australasia) Limited, this firm has been responsible for a number of restrikes in lead for the Numismatic Society of Victoria.

It is evident that Taylor also struck several trial pieces from each of the dies. The British Museum has a complete set in gold while the Royal Australian Mint has a set of gold-coloured gilt copper restrikes. A number of private collectors have some highly prized pieces and on rare occasions these are offered at auction.

It says much for Taylor's perseverance that back in London in 1855, he prepared dies for a pattern fourpence, sixpence and shilling which bear a number of similarities to the previous gold issues. The shilling and sixpence pattern pieces were struck in gold, silver, pewter and copper with both milled and plain edges. The plain-edged pieces are restrikes and are less valuable. The fourpence pieces were struck in copper. The dies for these coins were never sent to Australia.

Sadly, it came to nothing, and Taylor's dream of becoming a rich and an influential patron of Australian coinage ended up as numismatic's hard luck story. It is believed the entire flop cost Taylor and his associates £15,000.

In about 1860, the reverse of Taylor's Australian pattern shilling was muled with the obverse of different varieties of Wiener's English pattern shilling. Specimens in gold, silver and copper were produced. Later restrikes of these mules also exist.