You are: Home » Australian coins » Articles » Journey to an Australian Currency

Journey to an Australian Currency

Australia has a unique currency history. From the pre-settlement trading practices of our Indigenous population, to the currency chaos of early settlement where coins from all over the world were used to buy and sell goods, to the British Parliament's declaration that only British currency could be used here. It certainly has been an interesting journey.

In 1901, the states joined together and the Commonwealth of Australia was born. At this time, British coins were the official currency of Australia and this would remain the case for another nine years.

In 1909, the Commonwealth Parliament passed a bill stating that Australia would have its own coins for the very first time. They would still be based on the British system of pounds, shilling and pence and included the following denominations:

In 1910, the first silver coins were issued – two shilling, one shilling, three pence and six pence. Then in 1911, the bronze one pence and half pence coins followed.

Interestingly, even though there were three branches of the British Royal Mint in Australia (Sydney, Perth and Melbourne), these coins were struck (produced) in Britain and India.

The first coins to be struck in Australia were the silver coins (two shilling, one shilling, three pence and six pence). This was at the Melbourne Mint in 1916.

An interesting fact – during the Second World War manufacturing shortages meant that some Australian coins had to be produced in the United States, at mints in San Francisco and Denver. All of these coins included a mintmark that showed where they were produced – S for San Francisco and D for Denver.

The change over to a decimal currency

The decision to change to a decimal, dollar-based currency had been attempted in Australia as early as the 1800s when Governor Brisbane tried to establish the dollar as Australia's currency. This idea was short-lived as the English Parliament passed an act stating that Australia would only use British currency.

Fast forward about 150 years and, in 1958, the Prime Minister, Sir Robert Menzies made an election promise to investigate the possibility of a decimal currency.

It was a big decision to change a nation's currency, so why was it being considered? There were a few reasons:

The British system of pounds, shillings and pence was quite confusing

The Australian pound (our new currency from 1909) equalled 20 shillings and each shilling was worth 12 pence. Working with a base unit of 12 made calculations quite difficult.

At the time, mistakes were easy to make when calculating in pounds, shillings and pence and this often made transactions more difficult than they had to be.

Many countries around the world had decimal currencies

At the time around 95 percent of the countries around the world had decimal-based currencies. Australia was one of the last countries to change over (in 1966) and New Zealand followed us in 1967. It would be much easier for Australia to trade with other countries if we had a decimalbased currency

It was a chance for Australia to establish a national identity

Through its post-settlement history, Australia had been a very English nation. Our British-based currency was just one example of this. Developing a new currency and moving away from the British system was a way for Australia to forge a new independent global identity

A decision is made

In 1963, the government formally announced that Australia would be changing to a decimal-based currency. Many decisions needed to be made:

What denominations would the currency have?

It was decided that there would be the following coins (notes would come later):

What would it be called?

Many names were suggested for the new currency including:

It's interesting that these names were either very British (and royal) or very Australian. Eventually it was decided that our new currency would simply be known as the Australian Dollar. 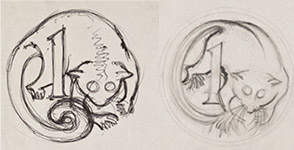 In 1963, when the government announced that it would be changing to a new currency, it was time to start thinking about designs for the coins. Six leading artists were asked to prepare a plaster model of a design for each coin, apart from the fifty cent coin, as it had already been decided that this would feature the Australian Coat of Arms.

The competition stated that a distinctly Australian theme had to be reflected in the designs. The winner was Stuart Devlin and he was given six months to complete his designs (not very long is it?!). Stuart was responsible for the designs we know today on the five, ten, twenty and one dollar coins.

The ABC website has an interesting video talking about the designs of the new currency.

The official changeover day was 14 February 1966. Leading up to this date, the government educated the public about the change. There was an advertising campaign called the Dollar Bill campaign. Dollar Bill appeared in print advertisements and was part of a large television campaign too. Dollar Bill's job was to explain, in simple language, how the changeover to decimal currency would work and to ensure the public that everything would run smoothly.

Here is an example of a television commercial www.youtube.com/watch?v=Y6JawKH2yaQ

The people were nervous

It is understandable that most of the population was a bit nervous about the changeover day. Would there be enough currency? How would they work out the prices of goods? Would people be paid correctly?

Many businesses tried to make people's lives easier by publishing ads and catalogues with prices in the old and new currencies. The government also issued currency converters to help people make calculations, and television commercials continued for a while. A jingle was released to explain the changeover.

It used the tune of an old Australian bush ballad – Click go the Shears – and it went like this:

Overall, the changeover went very smoothly and Australia's journey to its very own currency was complete.