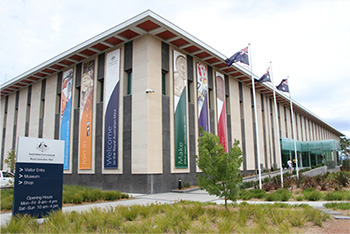 The Royal Australian Mint is responsible for producing Australia's circulating coins. It is astonishing to think that every single coin, in the pockets and purses of millions of Australians, was made in a quiet Canberra suburb.

The Mint was officially opened on 22 February 1965 by His Royal Highness, the Duke of Edinburgh. The actual building is located on Denison Street which was built especially to provide access to the Mint. To this day, the Mint does not have a street number and the postal address is simply Denison Street, Deakin.

Back then, Deakin was on the outskirts of Canberra, but now it is a busy inner southern suburb of the Nation's Capital, close to the city centre and the parliamentary triangle. 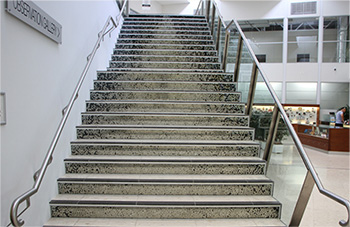 The first big job of the Mint was to produce new coins for the introduction of decimal currency on 14 February 1966. Since then, it has produced more than fifteen billion circulating coins. It is now able to produce an amazing two million coins per day!

As well as being responsible for producing Australia's coinage, the Mint produces coins for other countries along with medals, medallions, and tokens for national and international private clients. The Mint is also responsible for maintaining the National Coin Collection which includes examples of all the coins we make plus old and rare coins from Australia and overseas. The collection was last valued at $24 million!

Coins have an obverse (heads) and reverse (tails) design. The obverse side of all current Australian decimal coins has an image of Her Majesty Queen Elizabeth II. This side also shows the year the coin was minted.

On 14 February 1966, Australia's first decimal coins (and dollar notes) were introduced. They were brought in to replace the pounds, shillings and pence which had been used until this date. These first coins' reverse sides all featured our unique native fauna and these animals are still seen on our coins today. However, many newer coins have also featured designs to commemorate special people or events from Australian history.

The reverse of the 5 cent coin features an image of an echidna. Designed by Stuart Devlin, it has not changed since 1966.

The reverse of the 10 cent coin features an image of a lyrebird. Designed by Stuart Devlin, it has not changed since 1966.

The reverse of the 20 cent coin features an image of a platypus which was designed by Stuart Devlin. This image has been used since 1966, but a number of commemorative designs have also been released. 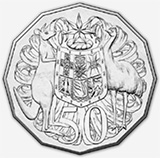 The reverse of the 50 cent coin features the Australian Coat of Arms. Designed by Stuart Devlin, it has had some important changes made to it since 1966.

Silver prices quickly increased and this coin became too expensive to produce, so and it was not made after 1966. There had also been complaints from people who were confused by its similar size to the 20 cent coin.

After two years without 50 cent coins being made, a new 50 cent coin was introduced in 1969. It was both a new shape and made from a different alloy. It is still used to this day. The current 50 cent coin is made of 75% copper and 25% nickel. Its shape is dodecagonal (12 sided), and it has a plain edge. It weighs 15.55 grams and measures 31.65 millimetres across flats.

Many different commemorative 50 cent coins have been produced.

The one dollar coin

The $1 coin was first introduced on 14 May 1984. Its reverse side features an image of five kangaroos, designed by Stuart Devlin. This image is still used today, but a number of commemorative designs have also been released.

Planning for a $1 coin began in the mid-1970s. It was decided that Australia needed a higher value coin which could be used in coin-operated machines and replace the paper $1 note which wore out quickly due to its frequent use.

The $1 coin is made of 92% copper, 6% aluminium and 2% nickel. It is circular in shape and has an interrupted milled edge. It weighs 9 grams and is 25 millimetres in diameter

The $2 coin was first introduced on 20 June 1988. Its reverse side features an image of an Australian Aboriginal elder, the Southern Cross and an image of Australian flora. This image was designed by Horst Hahne and inspired by a drawing by Ainslie Roberts. This image is still used today, but a number of commemorative designs have also been released.

Like the $1 coin, the $2 coin replaced a note, which wasn't lasting long because it was used so often.

The size of the $2 coin was decided after much consideration about:

The $2 coin is made of 92% copper, 6% aluminium and 2% nickel. It is circular in shape, and has an interrupted milled edge. It weighs 6.6 grams and is 20.5 millimetres in diameter.

The one and two cent coins

The 1 and 2 cent coins were first introduced with decimalisation on 14 February 1966.

On 21 August 1990, it was announced that these coins would no longer be produced. This was because these coins were losing value due to inflation, and there was a high cost mining the coins.

At the time it was stated that:

1c and 2c coins will continue to be legal tender, can still be used to purchase goods and can be deposited with financial institutions in the normal manner.

Both coins were taken out of circulation at the beginning of February 1992.

The First Australians did not use money as we know it; they used a barter system, trading goods from one end of Australia to the other. Some popular trading items included special stones for making tools, coloured stones (ochres) used for painting, and precious pearl shells that came from the far north of Australia.

The British sent the First Fleet to Australia to set up a penal colony. They didn't send much money with the First Fleet because the convicts were not paid anything and the soldiers were supplied with goods for free from the Government Store. Besides, there were no shops!

Most of the first coins used in Australia came from the pockets of the officers, sailors and convicts who settled in Australia. These coins included English sovereigns, shillings and pence; Spanish reales; Indian rupees and Dutch guilders. It wasn't long before there were coins in Australia from all over the world. Almost any coin (no matter which country it was from or what it was made out of) ended up being used as money in Australia.

As the Australian population grew, a proper money system was needed. There needed to be enough money to go around, and people had to know exactly what each coin was worth.

Governor King tried to solve the problem by making a proclamation, fixing the value of all of the different coins in the colony. These became known as the Proclamation Coins.

However, there were still problems. There simply weren't enough coins, and many trading ships took precious coins out of the colony as payment for cargo.

The British Government decided to send 40,000 Spanish dollars to the colony. Governor Macquarie asked a convict named William Henshall (who had been convicted of forgery) to punch a round piece out of each of the Spanish dollars.

This almost doubled the number of coins – producing 39,910 doughnut shaped pieces (known as holey dollars) and the same number of solid pieces from the centre (these were called dumps). All the coins were stamped with the words New South Wales, and holey dollars and dumps were used in NSW until 1829 and in Tasmania until 1849.

There are only around 300 holey dollars and around 1000 dumps still in existence. Can you imagine how valuable one of these coins would be today?

The English Parliament passed the Sterling Silver Money Act which officially made British coins the only recognised form of currency in Australia. The Spanish dollar soon fell into disuse because it was no longer worth anything. Silver coins were shipped to Australia after being made at the British Royal Mint.

The first gold discovery in Australia was in Victoria in January 1849, and by 1851 the life of the colony had been disrupted because of the gold rush. Within a few years there was pressure to convert this gold into something that could be easily spent.

While Australia was waiting for a mint, people were making up their own rules about how to turn their gold into money. The Adelaide Assay office made strips of stamped gold which came to be known as the Adelaide ingots. Each of these ingots was unique and individually stamped to indicate its weight and how pure its gold content was

A branch of the British Royal Mint was opened in Sydney. A Melbourne branch followed in 1872 and a Perth branch opened in 1899. 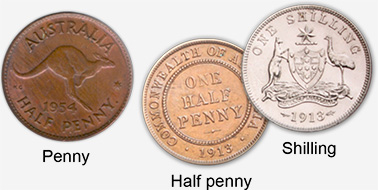 In 1909, eight years after Federation, the Federal Parliament passed a bill allowing Australia to have its own coins. In 1910 the first distinctive Commonwealth coins were issued. The coins were based on the British sterling system of pounds, shillings and pence.

The government announced it was planning to convert to a decimal currency system in the coming years. Six leading artists were commissioned to submit designs for the new coins. The rules included that the design must be an Australian theme. Stuart Devlin was the artist selected and he was given six months to complete his work. 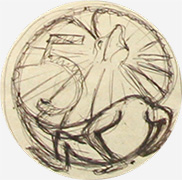 The Royal Australian Mint opened in Canberra. Australia now had its own Mint which began producing decimal coins.

On 14 February, decimal currency was introduced in Australia, with 1c, 2c, 5c, 10c, 20c and 50c coins which were all round in shape. These decimal coins replaced the half penny, penny, threepence, sixpence, shilling and florin.

The circular 50c coin was replaced by a 12-sided 50c coin which we still use today.

A $1 coin was introduced to replace the $1 note (which was made out of paper). Why? The $1 notes kept wearing out too quickly from being touched and passed around.

A $2 coin was introduced to replace the $2 note.

Australia's 1c and 2c coins were taken out of circulation because their worth had dropped, and they were becoming too expensive to make.

Australia's first coloured circulating coin was produced. It was a $2 coin and commemorated Remembrance Day with an image of a red poppy on the reverse side. Only half a million of these were produced so they are quite rare.

It has been 50 years since decimal currency was introduced on 14 February 1966.

Before 1966, Australia had a money system that was based on the imperial (British) pounds, shillings and pence. With 12 pennies in a shilling and 20 shillings in a pound, there was a lot of difficult maths involved in using our money. It was on 14 February 1966 that Australia started to use decimal currency – the dollars and cents that we know today. This was a lot easier than the old money and showed off the unique Australian animals that set this country apart from the rest of the world.

The imperial coins included the half penny, penny, threepence, sixpence, shilling and florin. The obverse side of all the coins featured the reigning Australian monarch. Since 1953, this has been Her Majesty, Queen Elizabeth II.

The coin-making process is an interesting one. It takes hundreds of hours of careful work to get from the initial idea to the finished coin. Here are the steps involved. 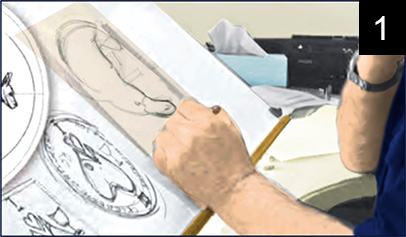 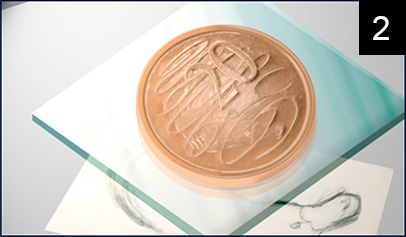 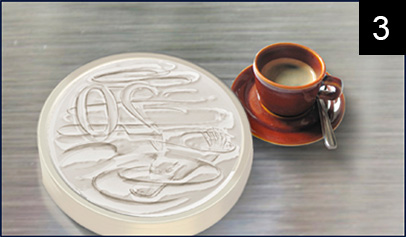 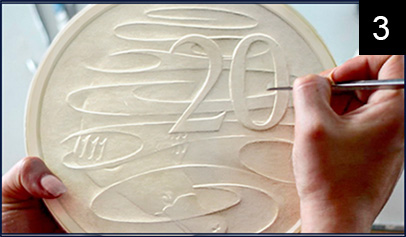 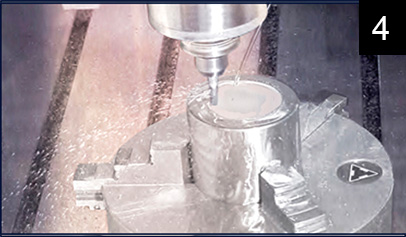 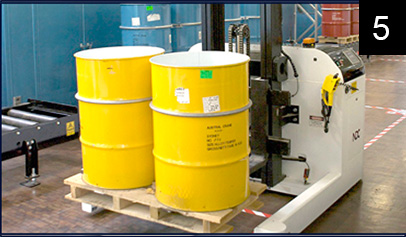 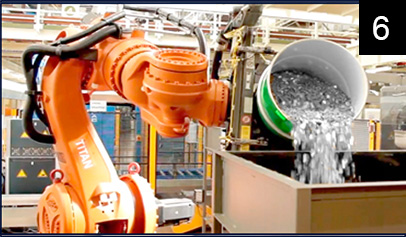 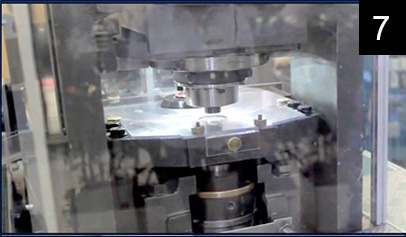 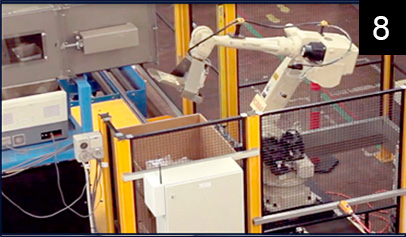