One of those most difficult, yet paramount concerns for the coin collector is grading. To the collector this will help him find the best coin of his desired type for his collection. To the investor, this would mean he wouldn't need to rely on third party gradings from dealers, and with practice could confidently purchase coins off free markets such as eBay without having to fear finding out the coin has been over-graded two or three years down the track.

Firstly, what is grading? A common misconception is that grading rates the appearance of the coin. This is not true; rather, it rates the level of preservation of the coin. Primarily, it concerns the amount of wear that the coin has received through circulation.

An important factor that must be first considered is, was the wear received through circulation? There are many ways an Uncirculated coin could have apparent wear. This could be caused through wear on overworked dies, through friction 'caused from coins rubbing up against each other in bagging and rolling processes, etc. 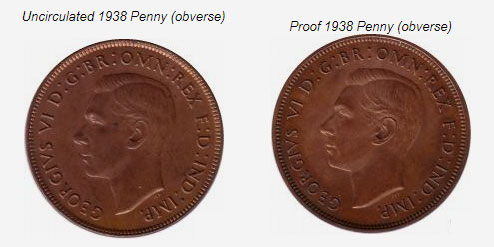 Observe the detail in the hairline, the prominence of the rim and legends in the proof example compared with the uncirculated piece. Even though the Unc piece hasn't seen a day of circulation, it has suffered from a slight weakness in strike which may, to the beginner, appear as wear. There is no definitive way of differentiating between wear that was caused during the striking process and wear caused through circulation, though there are some pointers.

Though strictly doesn't affect the grade, it is usually considered in determining the value of the coin. On silver coins, usually a lovely even tone with good eye appeal may increase the value of the coin to the discerning collector, and of course, you can't go wrong with a coin in the original color presenting full blazing mint lustre. The most attractive coins in my opinion were always mildly toned with a strong degree of mint lustre prevailing beneath. On copper coins, however, usually untoned (red to orange) pieces demand significant premiums over toned examples.

Now down to the actual science of grading. It is impossible (or at least very difficult) to accurately grade a coin without first seeing an uncirculated piece.

Here is an Uncirculated, and exceptionally well struck example, being fully struck up except for the top of the shield and moustache. (observe how those features seem somewhat flat and undetailed).

Let's take a close look at George V's crown, but first some definitions are in order:

The first three of these features are almost always complete on Uncirculated pieces (though some threepence tend not to have all eight pearls due to a weakness in strike). The orb in this particular scan is hard to see clearly. A complete orb will look similar to this:

In addition, George V's moustache is weakly struck also, common to most threepence. On a perfectly struck coin, it should present a few hairlines through it.

In this particular example the emu is fully struck, with it's feathers extending to the neck region, rarely seen on threepence (though relatively common on this date). However, emu feathers are commonly weakly struck and if the coin you bought as an Unc doesn't display as much detail as this, don't fear, it's most likely suffered from a weak strike.

Grades and their Definitions

If the obverse and reverse grades differ, it is usual that you state both grades in the format, obverse/reverse. Eg a coin with a VG obverse and a Fine reverse would be given the grade VG/Fine.

The Sheldon Numerical system is a numerical method of grading intended to be able to grade a coin right down to the last bagmark. Though it certainly can't achieve such, it definately offers some advantages over the adjectival system.

I hope this article has helped you to grade coins more accurately and hopefully will aid you in your purchases over eBay. If there's one thing I can recommend, is that with every valuable coin you purchase off eBay, bring it to a trusted dealer to grade. Most will do this free of charge and hopefully will aid you in determining the level of each seller's own personal standards in gradings.