This article represents a portion of the Reserve Bank of Australia Annual Report 2019 - Part 2: Operations - Banknotes

The Reserve Bank is responsible for producing and issuing Australia's banknotes. The Bank seeks to ensure that banknotes in circulation are of high quality and in sufficient volume to meet public demand. Australia has one of the safest and most secure currencies in the world, as reflected in the low level of counterfeiting it experiences. To ensure that this continues to be the case, the Bank researches anti-counterfeiting technologies and developments in banknote design. Based on this work, the Bank has been undertaking a major upgrade of Australia's banknotes, incorporating innovative new security features. Arrangements for storage and distribution of Australia's banknotes have also been upgraded in recent years to allow the Bank readily and cost-effectively to accommodate changing patterns in the demand for banknotes in the community. 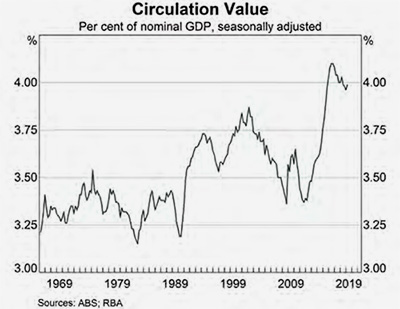 Per cent of total banknotes outstanding, by value

Despite the overall decline in the use of cash for day-to-day transactions, a core group of Australians still rely on physical currency, with the Bank's 2016 Consumer Payments Survey showing that around 20 per cent of Australians use cash in at least 80 per cent of their transactions in the period of the survey. People in this group tended to be older, have relatively low household income, and reside in more remote communities than the average Australian. 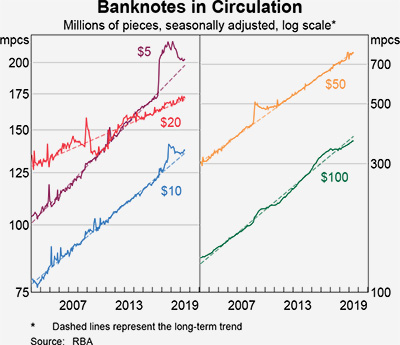 The Reserve Bank has established distribution agreements with a number of commercial banks to provide the banks with timely access to banknotes. In 2018/19, the Bank issued banknotes worth $8.5 billion, of which $1.7 billion had been in circulation previously and around $6.8 billion were new.

The Reserve Bank aims to maintain a high quality of banknotes in circulation. High-quality banknotes are more readily handled by machines and make it more difficult for counterfeits to be passed. Accordingly, the Bank has arrangements that encourage the commercial banks and the cash-in-transit companies periodically to sort the banknotes they handle to agreed quality standards. Based on this sorting, banknotes that remain fit for circulation get redistributed, while those that are deemed unfit get returned to the Reserve Bank's processing site in Craigieburn. These unfit banknotes are assessed to confirm their authenticity and quality. In 2018/19, the Bank received $2.9 billion worth of banknotes, and almost all were deemed to be unfit for recirculation.

The Reserve Bank provides an additional service through its Damaged Banknotes Facility. The facility is offered to members of the public who unwittingly have come into possession of damaged banknotes or whose banknotes are accidentally damaged, with the aim of ensuring that they do not face financial hardship. Claims that meet the requirements set out in the Bank's Damaged Banknotes Policy are paid based on their assessed value. The Bank processed 15,009 claims and made $4.2 million in payments in 2018/19.

The Reserve Bank maintains banknote holdings at its storage facilities. It does this for inventory management purposes - so it can accommodate growth in the number of banknotes in circulation as well as seasonal fluctuations in demand - and to meet contingency needs in the event of systemic shocks and production disruptions.

In 2018, the Reserve Bank completed its program to upgrade its banknote infrastructure. The National Banknote Site (NBS), located at the Reserve Bank's Craigieburn site in Victoria, has been in full operation since August 2018, storing, processing and distributing banknotes. The NBS has in place a range of automation equipment found in modern warehouses to support operational safety, security and efficiency. The site is well placed to manage the Bank's banknote storage, processing and distribution activities for decades to come, and has allowed the Bank to streamline its other banknote infrastructure.

In particular, the banknote storage facility in the Reserve Bank's former building in the Melbourne CBD was officially closed on 23 March 2018, marking the end of a significant chapter in the Bank's history. Banknote distribution from the Bank's Head Office in Sydney will cease at the end of 2019. Since reopening in 2009 for transactions, approximately 1 billion banknotes, worth a combined value of around $40 billion, have been issued from Head Office.

The level of counterfeiting in Australia remains relatively low by international standards. In 2018/19, around 18,000 counterfeits, with a nominal value of just over $1 million, were detected in circulation. This corresponds to around 11 counterfeits detected per million genuine banknotes in circulation, a 38 per cent reduction from 2017/18.

Law enforcement efforts to investigate and prosecute counterfeiting operations play a large role in managing the threat of counterfeiting. When counterfeit banknotes are sent to the Reserve Bank's Counterfeit Examination Laboratory, they are assessed by specialised document examiners. Counterfeits that are considered to be made by the same production source are grouped, monitored and referred to the Australian Federal Police (AFP) for investigation. The AFP, state police forces and the Commonwealth Director of Public Prosecutions all work to investigate and prosecute counterfeiting operations, with information and expert witness statements often provided by the Reserve Bank. In 2018/19, the Bank completed 200 statements relating to 5,221 counterfeits. In addition, the Bank is aware of 32 prosecutions that occurred during the year relating to the possession, passing and making of counterfeit currency.

Figures are preliminary and subject to upward revision because of lags in counterfeit submissions to the RBA. Source: RBA 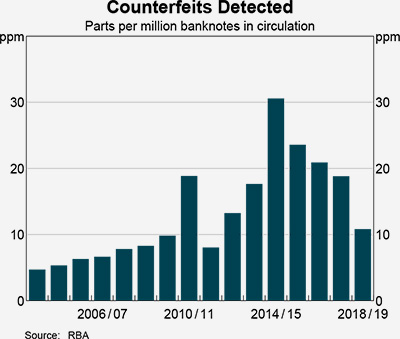 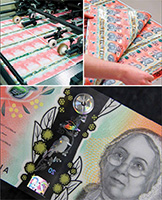 To ensure that Australian banknotes remain secure against counterfeiting, the Reserve Bank is issuing an upgraded series of banknotes. The new $5 banknote was released in 2016, the new $10 in 2017 and the new $50 in October 2018. A new $20 banknote is scheduled to enter general circulation in October 2019. The Reserve Bank revealed the design of the new $20 banknote in February 2019. The new $20 continues to celebrate enterprise and ingenuity, with the design featuring the Reverend John Flynn, who founded the Royal Flying Doctor Service, and Mary Reibey, who became a successful businesswoman after arriving in Australia as a convict. The remaining denomination - the $100 - is well advanced in design development and is expected to be issued in late 2020. In mid 2019, the Reserve Bank's printer, Note Printing Australia Limited (NPA), printed the one billionth banknote in the new series.

The new banknotes incorporate new security features such as the top-to-bottom window, which contains optically variable images, including a flying bird and reversing number, as well as an ink patch with a rolling colour effect. The new banknotes also retain many of the key design elements of the first polymer banknote series, including the people portrayed, size and colour palette.

The Reserve Bank implemented a communication strategy to ensure that the public was well informed about the new banknotes and could readily identify the new security features. With two denominations already having been issued, a relatively small advertising campaign was run for the new $50, predominantly using digital channels and some radio advertisements.

During 2018/19, the Reserve Bank continued to engage with industry and members of the public to increase knowledge about the new and existing banknotes. Some of these events focused on celebrating the contribution of stakeholders who have lent their expertise to the Bank throughout the design process for the new $50 banknote. This included Aboriginal artist Muriel Van Der Byl (also known as Aunty Muriel and whose artwork features on the banknote) and supporters of Edith Cowan's legacy in Western Australia. In October 2018, members of the vision-impaired community had an opportunity to explore features of the new $50 banknote at a preview event at Vision Australia in Melbourne. At the event, there was positive discussion about the real-life applications of the tactile feature, particularly as the $50 is the most common banknote dispensed by ATMs.

A couple of months after the new $50 banknote was released into general circulation it was noticed that there was a spelling error in the microprint containing the excerpt from Edith Cowan's maiden parliamentary speech. Despite the misspelling, these banknotes remain legal tender and can continue to be used. The error was corrected in the print run that commenced in mid 2019 and the Reserve Bank and NPA have reviewed processes to reduce the likelihood of such an error occurring in the future.

Communication with the cash-handling industry - which includes equipment manufacturers, financial institutions and other high-volume cash handlers, such as retailers and hospitality venues - has been an important component of the Next Generation Banknote Program. The Reserve Bank has engaged in regular communication with the cash-handling industry (including via an online central hub of information) to support their equipment upgrades and educate their staff and customers about the new banknote series. Bank staff have also continued to attend industry events and deliver presentations to share information about how to identify the security features of the new banknotes. 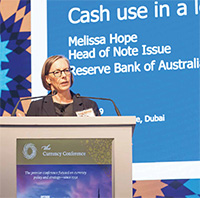 It is estimated that there are around half a million pieces of banknote-handling equipment in Australia - including ATMs, self-service checkouts, gaming machines and vending machines - that need to process the new banknotes. The $50 banknote is the most common banknote in circulation and accounts for the vast bulk of banknotes used in ATMs. Accordingly, the release of the new $50 banknote has been a significant logistical exercise for some organisations that distribute and/or handle banknotes. The speed at which the new $50 banknote has replaced its predecessor has been slower than that experienced for the $5 and $10 banknotes. This has been due partly to one of the major banks experiencing unexpected problems with dispensing the new $50 banknote from its ATMs; these problems are in the process of being resolved. The Reserve Bank will continue its engagement with manufacturers and owners of banknote-processing machines to help ensure the machines are ready for the launch of the new $20 and $100 banknotes.

The Reserve Bank has a banknote research and development (R&D) program focused on new banknote security features and detection equipment. The primary aim of this program is to ensure that Australia's banknotes remain secure against counterfeiting and easy to authenticate for a wide variety of users. This is achieved in part through collaboration with domestic and international experts from various external organisations, including universities, public and private companies, research institutes and other central banks. Fundamental to this program is a continuing assessment of the vulnerability of banknotes to different forms of counterfeiting, the mechanisms by which banknotes wear in circulation, and how the public and banknoteprocessing machines use and authenticate banknotes. 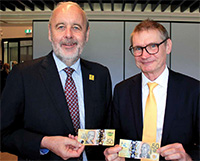 The Reserve Bank also works closely with its partners and suppliers to evaluate and incorporate new technologies and features into the banknote production process. In 2018/19, the R&D program continued to focus on providing technical advice and expertise as part of the development of the new series of Australian banknotes. This included assessing new technologies, developing strategies to ensure new features are durable, and developing quality-control systems for banknote examination. The R&D program is complemented by the design and manufacture of new instrumentation for quality assurance and the development of testing methodologies for the assessment of banknotes.

NPA is a wholly owned subsidiary of the Reserve Bank that produces banknotes and supplies other related services to the Bank and some other entities. In 2018/19, NPA delivered 428 million Australian banknotes to the Bank, comprising around 313 million new series $50 banknotes, around 97 million new series $20 banknotes and around 18 million new series $5 banknotes. In comparison, in 2017/18, 227 million Australian banknotes were delivered to the Bank by NPA. The aggregate amount paid by the Reserve Bank to NPA in 2018/19 for the supply of banknotes and related services was $108 million, compared with $82 million in the previous year. In addition, NPA delivered 46 million banknotes under contract to Papua New Guinea, Singapore and the Solomon Islands in 2018/19, dealing directly with the respective central banks in those countries. NPA also produced 2.05 million P Series passports for Australia's Department of Foreign Affairs and Trade. 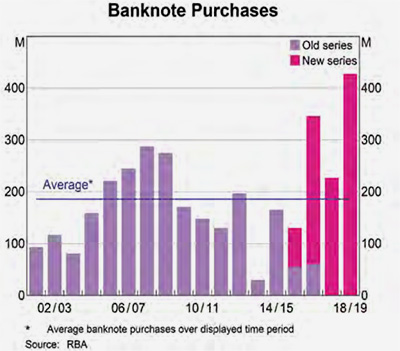