Coins and Australia - How are Australia's currency notes made? - Articles on Australian banknotes

You are: Home » Australian banknotes » Articles » How are Australia's currency notes made?

How are Australia's currency notes made?

Creating a new note is a complex and demanding task which seeks to marry different and often conflicting objectives. A note is primarily a security document, not just a work of art, but a blend of the two is sought. Long lead times are also frequently involved in the design and production of new notes. Traditionally, portraits and national symbols have been used as major design elements. Experience has shown that the public can more easily detect faults in counterfeit notes when these are part of the design. 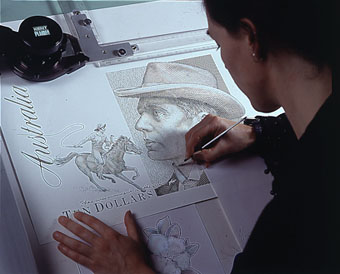 There are various approaches which can be followed in the design of currency notes. The following comments describe the process adopted for the design of the current series of Australian notes.

The Reserve Bank is responsible for the issue of Australia's currency notes, and this includes their design. The Bank is assisted by a panel of consultants, as well as suggestions from the public, as to the Australian men and women to be portrayed on notes. In deciding themes, the Bank, with the assistance of the design consultants, uses the opportunity of a new series to honour past Australians who have made an important contribution to Australia. Along with the portrait of the person, other design elements are included that relate to that person's particular achievements.

The role of the design consultants is also to reflect public opinion and provide an interface between the Bank and the designer. The consultants provide the Bank with independent advice on good design practice and assist the designers in realising the full potential of their ideas. 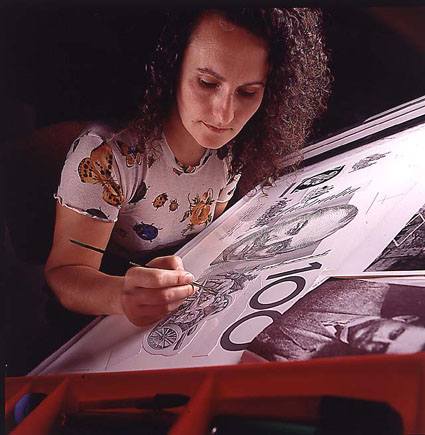 A design brief is prepared so that the design consultants and designer will be fully aware of features required in the note series by the issuer and printer. On the surface it is a simple brief: to design a note around the contributions of the people to be depicted on the note, within the constraints required for a high security document. In practice, it is quite complex. The constraints placed on the designer for security reasons are considerable. They limit the degrees of freedom the designer has. Also, each note has to have a predominant colour, to aid differentiation from other notes. But, for security, use of a broad range of colours in any given design is also important.

Once themes have been established, designers are commissioned to develop the designs. Through collaboration, various common threads are established to create a "family" feel to the series, yet still allow each design to have its own character. Examples of these common threads may be font for text and numerals, and signatures of the people portrayed. As the designer goes about the task of creating a note, there is an important role for the issuer, printer and the design consultants to oversee the project. As the process develops, advice can be sought, if necessary, from historians and special interest groups (eg representatives of people with impaired vision), and research carried out on various aspects of design detail.

The design project is split into various phases, and each must be completed and signed off before the next starts. These different phases include initial concepts, development of these concepts, development of portraiture, conversion of the developed artwork into a security document, and finally, proofing and printing. Progress at each stage is reviewed by the panel of consultants. The various designers themselves meet to review each others' work and discuss commonality issues. The designers are also in contact regularly with artists and technical experts from Note Printing Australia Limited (NPA) to ensure that what they are doing is consistent with the Bank's requirements and production capabilities.

Once a designer's conceptual design has been accepted by the Bank, skilled artists and designers at NPA begin the process of developing a design around the theme selected and converting it into a currency note. Part of this involves transforming the design into large-scale line drawings. These drawings become increasingly more complex as the design is developed to include security features. Computer aided design (CAD) technology is also used because of its flexibility and efficiency. During this process, the Bank continues to take advice from the panel of consultants. 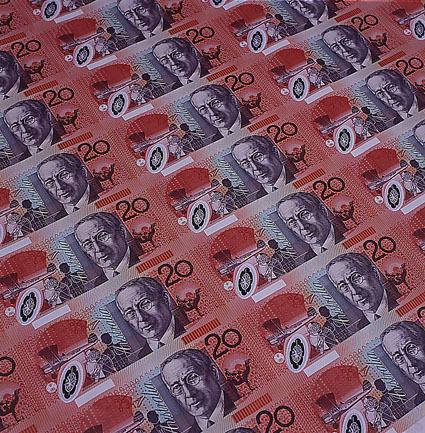 Printing plates, polymer substrate and ink come together in a vast printing hall, some 80 metres long, 40 metres wide and 10 metres high. Simultan printing machines print the background colours and patterns on polymer substrate. As the name suggests, both sides of the notes are printed at the same time, at speeds of up to 8 000 sheets per hour.

Printing of the major design elements is carried out on the intaglio printing machines, with ink being transferred to the substrate under great pressure. Separate print runs are required for each side of the note. The resulting raised print is one of the security features of currency notes.

Serial "numbers" are then added to the notes using a letterpress printing process. In the current note series, each "number" consists of a prefix of two letters and two numbers followed by six numbers. The two numbers of the prefix correspond to the year of manufacture of the note. Each of the 32 to 45 notes on a given sheet has a different prefix, but the same six numbers. From one sheet to the next, the range of prefixes remains the same but the numbers change downwards by one. That is, for a given prefix range, sheets are numbered downwards from yy999999 to yy000001 (where yy is the year). After this, a new range of prefixes is allocated. 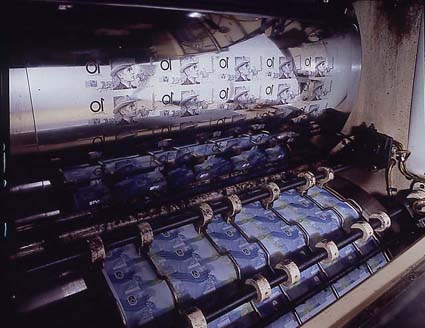 In a final print run, the notes are given two coats of a protective overcoating ink using an offset printing press. This overcoat contributes to the extended durability of polymer notes as it protects the printing; it also helps to keep the notes clean.

The completed sheets of notes are examined for faults. Those which are imperfect are marked with a machine-readable ink. Printed sheets are guillotined into individual notes which are then placed into containers in alpha-numerical order and transported to computer controlled Crosfield machines for final counting, removal of imperfect notes, and banding. The finished notes are then shrink-wrapped, palletised and stored in the finished notes strongroom prior to dispatch to the Reserve Bank branches around the country for distribution.

The accompanying diagram shows schematically the major steps involved in creating a currency note. The security of a note is importantly a function of the ingenuity of the designer in combining materials, many manufactured using equipment not commercially available, with a knowledge of visual perception.